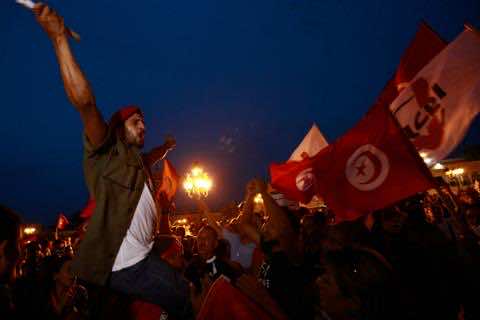 The People’s Movement of slain Tunisian MP Mohamed Brahmi on Monday called for a weekend rally to mark 40 days since the opposition leader’s murder plunged the country into crisis.

“September 7, the 40th day after the assassination of Mohamed Brahmi, will be a decisive day for Tunisia,” party official Zouheir Hamdi told Shems-FM radio.

The party is calling for a rally to take place on that day, Hamdi said, but gave no further details about the event.

Brahmi was gunned down on July 25 outside his home in a Tunis suburb, the second opposition figure to be killed after Chokri Belaid was shot dead in February, plunging Tunisia into a deep political crisis.

Both attacks have been blamed on Salafist militants, and the same gun was used in the two murders.

Since July, Tunisia has been rocked by a wave of protests organised by the opposition which is demanding the resignation of the Islamist-led government and the dissolution of the National Constituent Assembly.

The powerful UGTT trade union has been trying to mediate between the government, headed by the moderate Ennahda Islamist party, and the opposition but has so far failed to bridge the gap.

The National Salvation Front, a wide umbrella group of opposition parties, is demanding the formation of a non-partisan cabinet, but Ennahda has been resisting this.

Ennahda insists that agreement must first be reached on outstanding political differences, including on the content of a much-delayed new constitution and an election timetable.

The opposition say Ennahda has failed to rein in jihadists, whose influence has grown since the 2011 uprising that toppled the former regime, and has not improved social conditions in the country.

In the weeks after Brahmi’s assassination the opposition mobilised huge numbers of demonstrators and staged almost nightly rallies in Tunis.