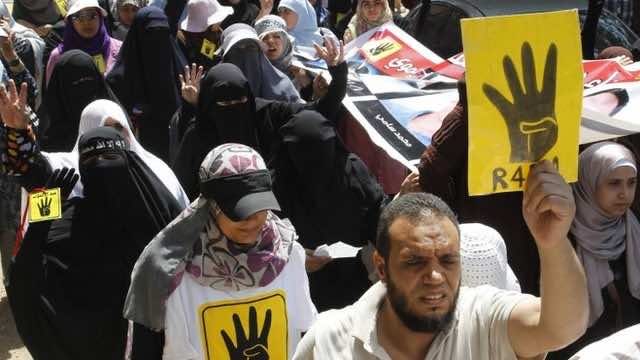 CAIRO – Egyptian authorities have arrested 1,876 members and supporters of the Muslim Brotherhood, including 20 leading members, in the capital Cairo since the ouster of Mohamed Morsi, Egypt’s first elected civilian president, a security source told Anadolu Agency on Tuesday.

“Hundreds of Morsi’s supporters were ordered to languish in jails and were distributed to various prisons, particularly the Tora Prison, south of Cairo, where most Muslim Brotherhood leaders are held,” the source said.

The detainees include 20 senior Muslim Brotherhood leaders, such as Supreme Guide Mohamed Badie.

He added that 360 Muslim Brotherhood backers were arrested following clashes that erupted in central Cairo’s Ramses Square and 230 people on the background of violent clashes that broke out around the nearby Ezbakiya Police Station later.

Central Cairo’s prosecutors ordered 156 Morsi backers to remain in custody over charges of causing violence in the Bab Al Shaariya neighborhood near to Tahrir Square, the security source said.

This brings the number of Muslim Brotherhood supporters held pending investigation to 1,876, he added.

The source said Egyptian police succeeded in arresting most Muslim Brotherhood leaders during the past two weeks after raiding their homes upon orders from the Egyptian General Prosecutor.

He added that nearly 20 Muslim Brotherhood leaders are kept in the Tora Prison, including Supreme Guide Mohamed Badie and his two deputies Khairat Al Shater and Rashad Bayoumi.

The security source said scores of Muslim Brotherhood supporters were also detained outside Cairo pending further investigation into charges of violence and incitement.