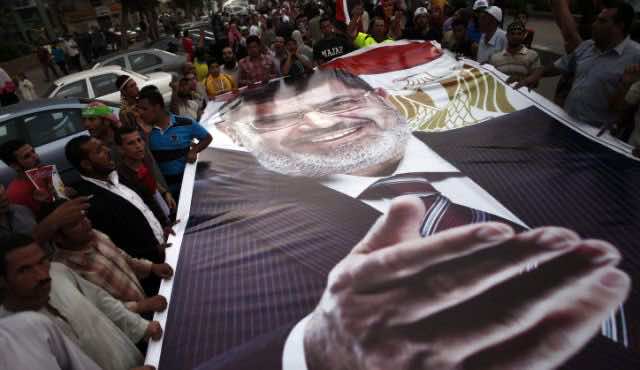 National Alliance for Defense of Legitimacy called on Egyptian people to step up their protests against military overthrow of Morsi, which Morsi’s supporters liken to a ‘military coup’

A coalition of largely Islamist groups supporting ousted Egyptian president Mohamed Morsi on Wednesday called on Egyptians to hold mass protests on Friday under the banner of ‘the people protect their revolution.’

In a statement, the National Alliance for the Defense of Legitimacy called on the Egyptian people to step up their protests against the military overthrow of Morsi – a move likened by Morsi’s supporters to a ‘military coup’.

Nationwide protests would continue “until the coup is defeated, and its leaders are prosecuted for their heinous crimes,” the statement said.

The call came one day after Morsi supporters staged nationwide protests to call for the “return of constitutional legitimacy.”

The Egyptian army ousted Morsi on July 3 following mass protests against him. It also suspended the constitution and installed the head of the constitutional court as interim president.

The alliance also decried the jail terms handed down by a military court to Morsi’s supporters in the canal city of Suez.

“Suez was the focal point of the January 25 revolution in 2011. The city now is targeted by the coup plotters with unfair, illegitimate unfair verdicts against its free sons who were charged with trumped up charges,” the statement said.

Army spokesman Col. Ahmed Mohamed Ali said that a military court on Tuesday sentenced one Morsi supporter to life in prison and slapped different jail terms on 10 others over their alleged involvement in attacks on military personnel and churches.

These verdicts are “major setbacks to the gains of the January 25 revolution,” the statement said, with reference to the 18-day uprising in 2011 which ended the 30-year rule of former president Hosni Mubarak.

“Terrorizing citizens through the return of military trials for civilians is a failed attempt by the coup authorities to break the will of the Egyptian people, and to suppress the daily protests supporting legitimacy and rejecting the coup,” it added.