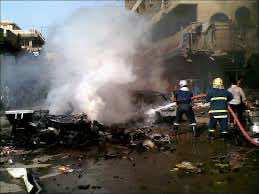 According to police sources, a police crew on patrol near the al Maes bazaar was the target of the attackers using a car laden with explosives. 5 policemen were killed, 2 civilians wounded.

Security forces cordoned off the area where the bomb attack occurred, launching an investigation.

Armed men killed 22 people in an attack to their house in the Iraqi capital Baghdad.

According to the security sources, a group composed of an estimated 50 unidentified armed assailants killed 22 people from the same family during a raid to their house. The building was later destroyed with explosives.

Iraq’s security forces gave no information regarding the armed attack in Baghdad.

Meanwhile, 25 people were kiiled and 117 others wounded on Tuesday in the Iraqi capital Baghdad as a result of the blasts of simultaneous car bombs.