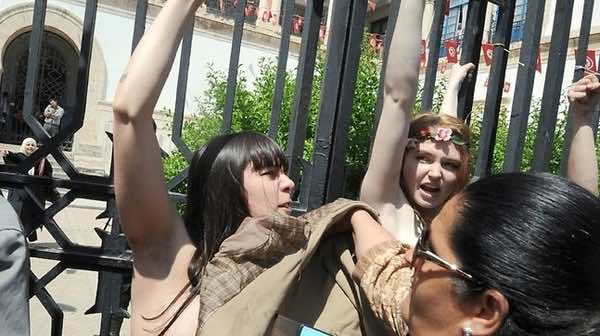 A new documentary on show at the Venice Film Festival shows that the Ukrainian feminist group, Femen, which runs under the slogan “our mission is protest, our weapons are bare breasts,” was founded, and is controlled, by a man, The Independent reported on Tuesday.

The documentary entitled: “Ukraine is not a Brothel,” is directed by 28-year-old Australian film-maker Kitty Green. In the documentary, Green revealed that Victor Svyatski masterminded the group.

According to Femen, Syvatski, was previously a “consultant” for the group and he was badly beaten up by the secret services in Ukraine earlier this summer because of his activities on their behalf.

However, Green describes Svyatski not merely a supporter of Femen, but as its founder.

The film also claims that Syvatski sent the Femen activists on one of their most dangerous missions to Belarus, where they were arrested by secret service agents, stripped, humiliated and abandoned in a forest close to the Ukrainian border.

Green was with the activists on their Belarus trip. She told The Independent that her footage was stolen by the national intelligence agency and that she was abducted, “kept in confinement for about eight hours,” and then deported to Lithuania.

While Green hails Svyatski’s organizational abilities and charisma, she questioned his influence.

The director spent a year living in a tiny apartment in Kiev with four of the Femen members and filming their activities.

“I would shoot their protests and they would take them and put them on their website,” she explained.