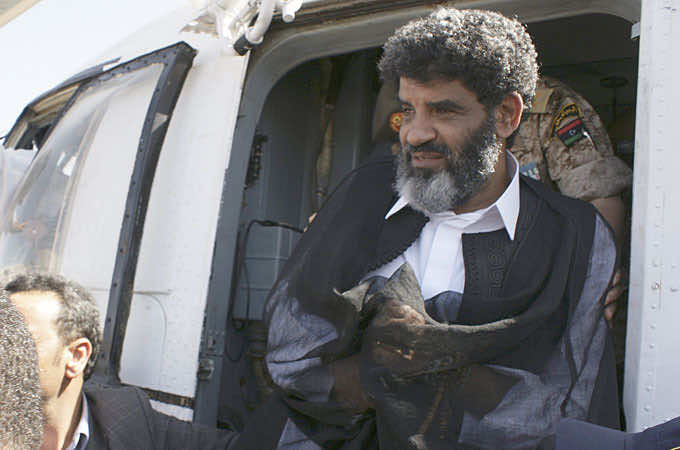 The daughter of Libya’s ex-spy chief Abdullah al-Senussi, who was reportedly abducted this week, was actually taken by special security forces for her own protection, a Facebook message said Thursday.

Senussi was the intelligence chief for Libya’s long-time dictator Moamer Kadhafi, and his daughter Unud had completed a 10-month jail term when she was snatched on Monday.

Justice Minister Salah al-Marghani said Unud, in her 20s, was snatched by “turban-wearing armed men” who ambushed her convoy as she was leaving prison on Monday.

He said she was on her way to the airport to join her family when the attack took place outside Ain Zara prison in the Tripoli suburbs.

But a unit of special security forces, in a message posted on the Internet, said they grabbed Unud to counter a kidnap bid by “other parties” who wanted to hold her for ransom.

“Unud will be held temporarily at Tripoli’s military police prison, and (later) will be placed under house arrest with some members of her family,” said the statement.

It was published on the Facebook page of unit chief Haythem al-Tajuri, who heads a unit of former rebels who helped topple Kadhafi’s regime in 2011.

The unit is affiliated with Libya’s Higher Security Commission and linked to the interior ministry.

The group  said it had informed authorities of all aspects of the operation to seize Unud and that Tajuri made direct contact with Prime Minister Ali Zeidan.

A member of the Magerha tribe to which the Senussis belong also told AFP that Unud was “under the protection of a unit of special forces in Tripoli.”

Abdelkader Belgacem said the young woman was “well” and “was able to phone her mother as well as her brothers and uncles.”

Meanwhile, Unud was seen in a video posted on social networks.  She appears in good health, veiled and dressed in black clothes and is also heard saying that she was “kidnapped not for ransom, but to be protected from other groups” planning her abduction.

The special forces claiming to hold Unud, meanwhile, blasted the authorities saying they did not provide her with adequate protection and let her leave prison in an non-armoured vehicle.

Unud’s father, Kadhafi’s brother-in-law, is also wanted by the International Criminal Court on charges of crimes against humanity during the 2011 revolt.

He is in a Libyan jail after being extradited from Mauritania.