Morocco World News
Home Highlights on Morocco Preaching Christianity in Morocco is a Political Project: Vice President of a...

Casablanca- Mohamed El Hilali, vice-president of  the  religious movement Attawhid Wal Isslah or Unification and Reform, said that preaching Christianity is a political project, according to the Moroccan website Lakome.com. 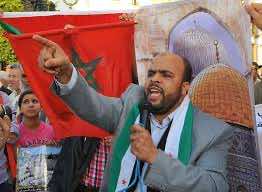 By
Jamal Saidi
-
Jamal Saidi is an English teacher.
Sep 6, 2013
Spread the love

Casablanca- Mohamed El Hilali, vice-president of  the  religious movement Attawhid Wal Isslah or Unification and Reform, said that preaching Christianity is a political project, according to the Moroccan website Lakome.com.

Mr. El Hilali depicted the young Moroccan man who was jailed for preaching Christianity as a victim of an ineffective and sputtered cultural and educational project.

He said during a phone interview that preaching Christianity is not a religious project but rather a political one. He also doubts the credibility of the Church, without naming one, regarding freedom of belief, saying that the church would have preached its doctrine among people who worship idols if it were really concerned about such freedom.

He added that Moroccan law prohibits proselytizing, referring implicitly to the article 220 of the Penal Code.  He went on to explain that anyone who attempts to shake a Muslim’s belief is a criminal according to the law.

He also stressed that the Quran is the guarantor of freedom of belief.

Freedom of  belief is  part of the public order that should not be violated, The vice president of Attawhid Wal Isslah emphasized.

On the other hand, Fouad Abed El Momeni, a prominent civil right activist, considered the sentence to be against freedom.  He pointed out that the attitude towards religion has changed, saying  that “ we are not in the covenants when people should embrace their kings religion, instead religion has become a matter of knowing and believing before embracing”.

He concluded that the legal provisions that criminalize preaching other religions is against freedom, and even against the logic that lies behind the desire to spread Islam.

Attawhid Wal Islah is a religious movement from which the Islamic ruling party stemmed. It is established in 1996 following a unity formed between two Islamic factions, namely Al Islah Wa Tajdid or Reform and Renwal and Rabittat Almostakbal Al Islami or the Association of Islamic Future.

It is worth recalling that  Abdelilah  Benkirane, the current prime minister, along with other Islamists, founded Al Islah Wa Tajdid in 1983.