SAINT PETERSBURG (AA) - Turkish PM: 'Everyone agrees that chemical weapons were used in Syria but the disagreement is on who used it.' 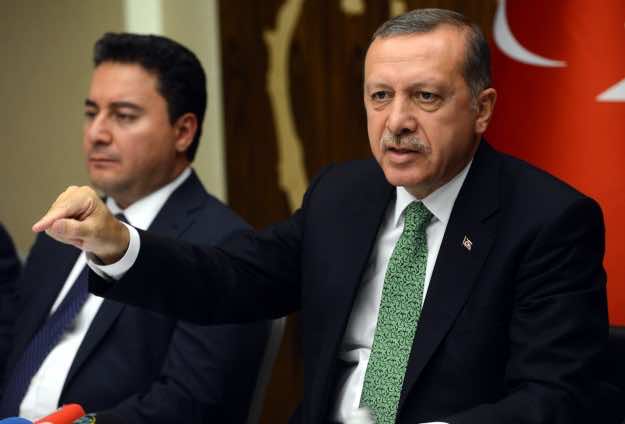 SAINT PETERSBURG (AA) – Turkish PM: ‘Everyone agrees that chemical weapons were used in Syria but the disagreement is on who used it.’

Turkish Prime Minister Recep Tayyip Erdogan said Friday, on the final day of  G20 Summit, that there was a disagreement between the countries on who used the chemical weapons in Syria.

Speaking at a press conference held after the G20 Summit in Russia’s Saint Petersburg just ahead of his visit to Argentina, Erdogan said an international joint operation could not be conducted on Syria as there was no UN decision yet.

Erdogan stated that the leaders discussed the chemical weapons attack in Syria during the summit in addition to the global issues.

Saying that Russia was hesitant regarding documents proving the chemical weapons attack and that the Assad regime mounted the attack, Erdogan said, “Everyone agrees that chemical weapons were used in Syria but the disagreement is on who used it, and UN reports are important in this context.”

-Putin: Use of chemical weapons in Syria provocation of the opposition

Answering the questions of journalists concerning the possible intervention in Syria, Putin stated that Syria seriously affected the world economy but the world opinion was still divided concerning action on Syria.

While the US, Turkey, Canada, France and English PM Cameron are in favour of intervention, many other states are against the idea of military intervention, Putin noted.

Stating that the use of chemical weapons in Syria is the provocation of the opposition, rather than the responsibility of the Assad regime, Putin claimed that polls show that the vast majority of the American people are against war in Syria.

Concerning his meeting with US President Obama, Putin stated that he had a quite constructive 20-minute bilateral meeting with Obama addressing several issues.

-Cameron: ‘Obama will be ‘persuasive’ in making the case for action in Syria’

British Prime Minister David Cameron, on the other hand, said Friday that US President Barack Obama was right to draw a ‘red line’ on the Assad regime’s chemical weapons attack on August 21 near Damascus which claimed more than 1,300 lives.

Speaking on the final day of G20 Summit, Cameron stressed even the Syrian regime accepted the use of chemical weapons and added that the UK cannot stand by while the people of Syria suffered.

Speaking from the G20, the Prime Minister announced that the UK will provide £52 million in new humanitarian funding; this brings the UK’s total funding to £400 million, double the £200 million of the UK’s largest previous response to a humanitarian crisis, said British office of the prime minister.

“The Prime Minister called for a strong and united push from G20 leaders for safe, unimpeded access for humanitarian workers inside Syria, including safe routes for aid convoys and the lifting of bureaucratic hurdles imposed by the regime. This would ensure aid agencies can deliver life-saving help when and where it is needed. The new support from the UK will help reach those in desperate need as a result of the ongoing conflict across the region, including the women and children who make up the majority of refugee numbers and are amongst the most vulnerable in the conflict.”

-Obama: No “mission creep” in Syria

US President Barack Obama has reiterated his determination for military action against the Syrian government, describing a possible operation as “limited and proportional” while dismissing allegations of “mission creep” in Syria.

The majority of the countries at G-20 were “comfortable” with the US’s conclusion that Assad was responsible, Obama said in St. Petersburg, where he spoke after the second-day meeting of the economic summit.

He said there was a “growing recognition that we cannot stand idly by” on last month’s chemical attack in Syria.

– No long-term solution without troops

“Given Security Council paralysis on this issue, if we are serious about upholding a ban on chemical weapons, then an international response is required, and that will not come through a Security Council action,” he said.

There would be “no long-term solution” without massive amount of troops, Obama said, which the countries in the international community “aren’t signing up for”.

“My goal is to maintain the international norm banning chemical weapons,” he said.

Regarding his dialogue with Russian President Vladimir Putin, Obama said he did not expect Putin and himself to agree on action in Syria, but described his conversation with Putin on the margins of the G-20 meeting as “candid and constructive.”

Obama will address the American people in a public speech on Tuesday while the US Congress will reconvene on Monday.

“I’ll make the best case I can to the American people, as well as the international community,” he said.