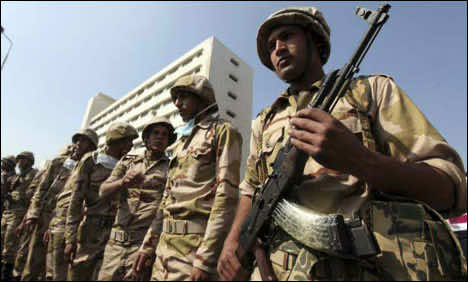 Police called in the military experts after residents of a village near the railroad spotted the bomb, the officials said.

The officials said the two mortar rounds and a rocket-propelled grenade attached to a fuse appeared to have been intended for a 6:00 am (0400 GMT) train.

The discovery of the bomb comes after a powerful explosion targeted Interior Minister Mohamed Ibrahim as he left his house for work on Thursday.

Ibrahim, who survived unscathed, later said the country faced “a wave of terrorism” amid a police crackdown on Islamist supporters of deposed president Morsi.

A senior health ministry official said one person wounded in the bombing died from his wounds on Friday.

The umbrella group of Islamists demanding Morsi’s reinstatement denounced the assassination attempt, and said they remained committed to peaceful protests.

But analysts say rogue militants will attempt to carry out attacks as the military and police continue rounding up Islamists.

The railroad between Suez and Ismailiya lies on the west bank of the Suez Canal, with the restive Sinai peninsula to the east.

On September 1, the head of the Suez Canal Authority Admiral Mohab Mamish said a militant launched an attack against a Panamanian-flagged ship passing through the vital waterway.

He gave no details, but a video posted on YouTube showed two men firing rocket-propelled grenades against a cargo ship, causing no apparent damage.

It was not immediately possible to verify the authenticity of the video, which featured the black banner used by Al-Qaeda inspired militants.

The military is facing an insurgency in the north of the Sinai peninsula, a haven for Qaeda-inspired militants who launch almost daily attacks against security forces.