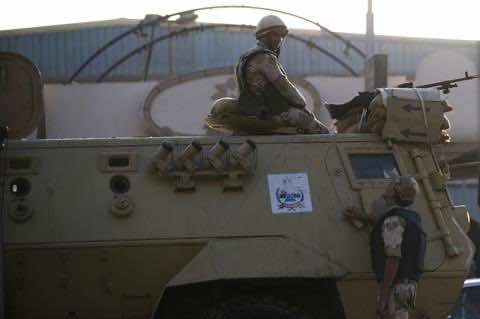 The country has seen an uptick in bombings and shootings, mostly aimed at security forces, since hundreds were killed in clashes when police broke up two Islamist protest camps in Cairo on August 14.

Police called in the military experts to defuse the bomb after residents of a village near the railroad spotted it, the officials said.

Two mortar rounds and a rocket-propelled grenade were attached to a fuse and appeared to have been intended for a 6:00 am (0400 GMT) train.

Hours later, unidentified assailants hurled a grenade at a police station in Cairo, which exploded without causing any casualties, security officials said.

This was the third such attack in several weeks on the police station in the working class neighbourhood of Boulaq al-Daqrour.

The discovery of the railroad bomb comes after a powerful explosion targeted Interior Minister Mohamed Ibrahim as he left his house for work on Thursday.

Ibrahim, who survived unscathed, later said the country faced “a wave of terrorism” amid a police crackdown on Islamist supporters of deposed president Morsi.

A senior health ministry official said one person wounded in the bombing died from his wounds on Friday.

Police say they suspect explosives were placed in the trunk of a car parked outside the minister’s home, and detonated as his convoy passed.

The umbrella group of Islamists demanding Morsi’s reinstatement denounced the assassination attempt, and said they remained committed to peaceful protests.

But analysts say rogue militants will attempt to carry out attacks as the military and police continue rounding up Islamists.

The railroad between Suez and Ismailiya lies on the west bank of the Suez Canal, with the restive Sinai peninsula to the east.

On September 1, the head of the Suez Canal Authority Admiral Mohab Mamish said a militant launched an attack against a Panamanian-flagged ship passing through the vital waterway.

He gave no details, but a video posted on YouTube showed two men firing rocket-propelled grenades against a cargo ship, causing no apparent damage.

It was not immediately possible to verify the authenticity of the video, which featured the black banner used by Al-Qaeda inspired militants.

The military is facing an insurgency in the north of the Sinai peninsula, a haven for Qaeda-inspired militants who launch almost daily attacks against security forces.

Meanwhile, state media reported that a “number” of people were killed on Saturday in the northern Sinai when military helicopters carried out several air strikes on suspected militant hideouts.

The claim could not be immediately verified. Authorities have restricted access to the volatile north of the peninsula.

For years, Sinai has defied the central government’s authority, with its Bedouin population complaining of poverty and discrimination.

But the surge in militant attacks there and elsewhere around the country have raised fears of a revival of the Islamist insurgency that plagued Egypt in the 1990s, badly damaging the tourism industry.

Many of Egypt’s most lucrative tourist destinations are in southern Sinai, along its Red Sea coast.