ROME - Egyptian and Syrian drug traffickers set fire to their ship carrying more than 30 tonnes of hashish before being arrested by Italian police in the central Mediterranean, police said Saturday. 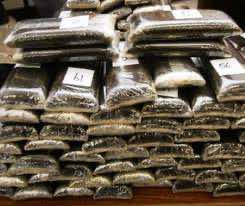 ROME – Egyptian and Syrian drug traffickers set fire to their ship carrying more than 30 tonnes of hashish before being arrested by Italian police in the central Mediterranean, police said Saturday.

Italian drug busters had been tipped off “three days ago that a major drug shipment was being transported on the cargo ship en route in the Mediterranean”, Italian police said in a statement.

Officers on Friday tried to board the Gold Star, an 85-metre freighter sailing under the Tanzanian flag, between the southern coast of Sicily and Malta.

But when they spotted the police speed boat “the crew of nine, of Syrian and Egyptian nationality, set fire to the ship to destroy their valuable shipment and then jumped into the water risking their lives given the position and height of the ship”, said the police.

The traffickers were rescued and taken into custody, and the ship was secured after the fire was brought under control.

Maltese forces cooperated in extinguishing the blaze, sending three patrol boats and a helicopter to the area, about 30 nautical miles (55 kilometres) from its coast, a military spokesman told AFP.