CAIRO - The deadly crackdown on Islamists across Egypt could radicalise their ranks and at the same time further bolster the powerful army during the country's transitional phase, experts say. 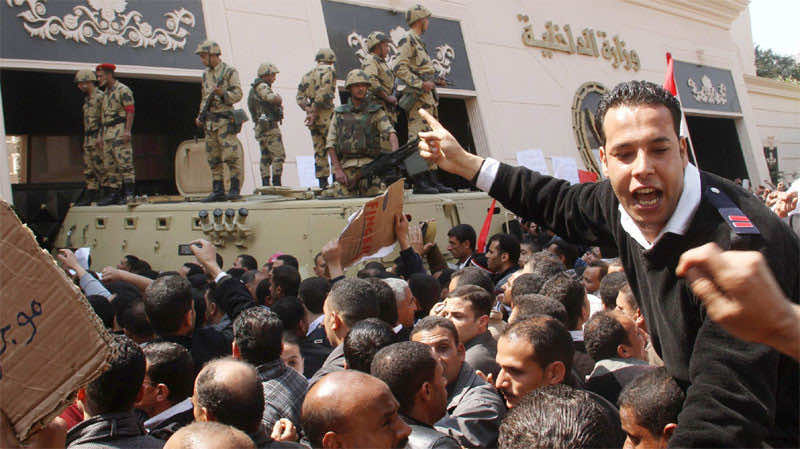 CAIRO – The deadly crackdown on Islamists across Egypt could radicalise their ranks and at the same time further bolster the powerful army during the country’s transitional phase, experts say.

The military has appointed an interim president and government, but oversees security in the face of street protests by Morsi’s supporters.

In mid-August police and soldiers broke up two pro-Morsi protest camps in Cairo in an operation that killed hundreds, following up with a wide ranging crackdown on Morsi’s Muslim Brotherhood movement.

The army has also been entrusted with overseeing a state of emergency and curfew imposed by the military-backed government, and is facing an insurgency by radical Islamists in the Sinai Peninsula.

The army general behind Morsi’s ouster has vowed to stand firm in the face of violence by extremists.

“Whoever imagines violence will make the state and Egyptians kneel must reconsider; we will never be silent in the face of the destruction of the country,” General Abdel Fattah al-Sisi said in August.

Since then violence has continued unabated as the authorities pursue their crackdown on the Brotherhood, rounding up more than 2,000 Islamists including the movement’s supreme guide have been jailed.

In what is seen as a reaction by extremists to the crackdown, Egypt’s interim interior minister was targeted in a car bomb attack last week, which he survived, while the army foiled a railway bombing near the canal city of Suez.

At the same time, the military is battling Al-Qaeda-inspired militants entrenched in northern Sinai.

Egypt expert Jean-Noel Ferrie said he expects the powerful military to remain a key player as long as the crisis remains unresolved.

He also spoke of the “ambiguous” situation of the army which has held an important role in the country since officers overthrew King Farouk in 1952.

It provided Egypt with all of its presidents — Mohammed Naguib, Gamal Abdel Nasser, Anwar Sadat, and Hosni Mubarak — until the election of Morsi, a civil engineer by training, in June 2012.

“The question is whether the army is acting as a group with its own agenda or as part of the continuity of the state, in which retired officers will hold key roles in the administration,” Ferrie said.

The transition plan set up by the army-backed interim government stipulates fresh parliamentary elections and a presidential vote by mid-2014.

Interim president Adly Mansour has already put the plan in motion by announcing on September 1 a 50-member panel to draw up a revised constitution to replace a contested one drafted during Morsi’s rule. The panel held its first meeting Sunday.

The army meanwhile Sunday carried out a second day of air raids on suspected militants in Sinai, witnesses said.

The army said nine “radical Islamists” were killed on Saturday in north Sinai when it launched its air and ground offensive in which nine suspects were also arrested and three arms caches destroyed.

Authorities describe the security campaigns against both Sinai militants and Islamists across Egypt as a “war on terrorism”, often lumping in the Brotherhood with jihadists.

This is “dangerous”, he said, because it allows the security forces “to grant themselves permission to brutally repress” suspects.

More than 1,000 people, mostly Morsi backers, have been killed in violence across Egypt since July 3.

Analysts fear that diehard Morsi supporters, who insist on the legitimacy of their democratically-elected leader, could become radicalised and launch attacks across Egypt.

In that case Egypt will be caught in a “vicious circle of repression and political violence,” said Bitar.

He expected that the army will continue acting “as a safeguard” in Egypt, where security and the economy have been the main challenges since the 2011 uprising that toppled Mubarak.