CAIRO - Witnesses said Egyptian military helicopters launched a second day of air raids on Sunday in Sinai in what the army described as "the largest military operation" to uproot Islamist militants. 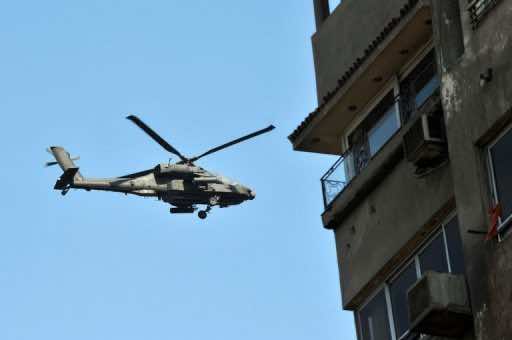 CAIRO – Witnesses said Egyptian military helicopters launched a second day of air raids on Sunday in Sinai in what the army described as “the largest military operation” to uproot Islamist militants.

The military’s spokesman said it was conducting “the largest military operation to purge Sinai of terrorism”.

The operation has so far killed “nine terrorists” and destroyed militant hideouts and weapons depots, said Colonel Ahmed Aly in a statement on his Facebook page.

The army had said the nine militants were killed on Saturday in north Sinai when it launched an air and ground offensive in which nine suspects were also arrested and three arms caches destroyed.

On Saturday, security officials gave a toll of 10 killed, 20 wounded and 15 arrests.

Aly said the troops have surrounded villages where militants have taken refuge.

The operation will “last several days”, he said in the statement.

Militants, including members of Al-Qaeda-inspired groups, have launched almost daily attacks on the security forces since the military overthrew Islamist president Mohamed Morsi on July 3.

Deadly violence had surged in the peninsula after former president Hosni Mubarak was toppled in a popular uprising in 2011, creating a security vacuum.

For years Sinai has defied the central government’s authority with its Bedouin population complaining of poverty and discrimination.

The surge in militant attacks there and elsewhere around the country has raised fears of a revival of the Islamist insurgency that plagued Egypt in the 1990s.

On Tuesday, the military staged intensive strikes in the Sinai which a security source described as the “biggest aerial assault of its kind” in the peninsula.

On August 19, militants killed 25 policemen in the Sinai, the deadliest attack of its kind in years.

The army has killed around 100 Islamists in the area over the past two months, and the militants killed 58 policemen, 21 soldiers and 17 civilians there, according to an AFP tally.

The army, meanwhile, continued demolishing smuggling tunnels to Gaza, with a security official saying on Sunday more than 90 percent of the tunnels have now been destroyed.

The tunnels have been a lifeline for the flow of food, clothing, building materials and fuel into the impoverished territory, which Israel has blockaded since 2006.

In February, Hamas said it had closed hundreds of tunnels used for smuggling in Rafah.