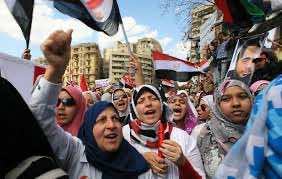 Rabat – As much as the Arab Spring offered a golden chance for Islamist movements to rise from a state of political exclusion, forced exile, and, in better cases, perpetual parliamentary opposition to climb to the top of legislative and executive power, the process also sped up their political relegation much quicker than many expected.

Islamist movements in the Arab world have had a long and turbulent history where they managed to survive an array of persecution from various regimes. These methods range from brutal executions, prison, and torture to deliberate exclusion from the political process and constant maneuvering to stop them from rising to power.

Despite all those ordeals Islamists showed a great capacity for resistance and patience. Such a strategy allowed them to gather more public support and sympathy for their cause, thus facilitating their rise to the top of the political system when the opportunity presented itself.

Yet few people would have anticipated that their time in government would be so short-lived.

Still, because of their long quest for power, it’s clear that they’re not ready to relinquish their hold on it, especially when they see their rivals trying to dishonestly and undemocratically tear it from their hands. As a result, their countries are likely to witness more troubles and quagmires.

Islamist parties certainly share the blame for the predicament and stand-offs prevailing in the countries where they came to power, even though the situations aren’t exactly the same and the share of responsibility differs from one Islamist party to another.

In Egypt the Muslim Brotherhood, “the mother” of Islamic movements, rose to power after more than eighty years of conflict with Egypt’s consecutive rulers, with whom they barely had some short-lasting moments of peace and rapprochement.

Since their creation in 1928 by Hassan Al Banna as a reaction to the abolition of “Khilafah” by Turkish leader Mustafa Kemal Atatürk, the Brotherhood have been coveting power as a means to establish their religious ideals of an Islamic state. Their relationships with the regimes in place have always been tense, leading to the movement’s continuous persecution at the hands of the monarchy, Gamal Abdelnasser, Anwar Elsadat and Hosny Mubarak.

The Muslim Brotherhood tried to ally themselves with these regimes at certain times, but their rising popularity was deemed a threat by Egypt’s rulers, making them a difficult force to control. The regimes thus decided to resort to tough measures to try to break them down.

The Brotherhood members faced ban, imprisonment, torture, executions and political exclusion for several decades. The brutality by which the regime tried to crush them contributed to the radicalization of some members and the emergence of divisions within the group, leading to the espousal of religious fanaticism by some fringe elements.

Despite all that, some of leaders of the movement took up the hard task of preaching a more moderate message. The Brotherhood became more involved in the political process despite the restrictions of the regime, thus becoming one of the main opposition forces in the country.

The January 2011 revolution in Egypt was the turning point in more than eight decades of the Brotherhood’s history. Being the most organized political force, it wasn’t unexpected that they’d easily secure a majority in the first post-revolution parliamentary elections.

Adopting a strongly religious political ideology, the Brotherhood and other Islamist parties have often been a cause of great concern among western countries and national elites in the Arab world because of questions about the compatibility of political Islam and democracy and whether Islamists are truly ready to accept it as a framework for the political system.

Islamists have long been accused by their critics of using democracy as a means to rise to power, and, once they secured this goal, they’d try to exclude their opponents and substitute the existing dictatorships with a potentially more ferocious and dangerous one because it wouldattempt to draw its legitimacy from religion.

Unfortunately the Muslim Brotherhood didn’t try to appease those concerns. After Mubarak’s fall they revealed how much thirst they had for power, constantly alienating several political and civil forces including some former allies.

As a president Mohamed Morsi proved to be an incompetent statesman with no clear independence from the movement’s “Guidance Bureau,” utterly failing to keep his promise of being “a president for all Egyptians”. In fact, many Egyptians believed he was “a president for the Brotherhood only”.

Morsi’s failure to fix the country’s declining economy led to more public discontent and further polarization and divide between his “friends and foes”. The popular frustration offered a good opportunity to the Brotherhood’s many adversaries to exploit the situation in order to try get rid of them by the most undemocratic and inhuman of ways.

The military’s ousting of Morsi and the following attempts to fiercely suppress his supporters was a hideous crime in which many are guilty: The military, the political elite, the media, Gulf States and western countries which seemed only slightly disturbed with the situation and barely raised a finger to criticize the loss of so many innocent lives.

Tunisia’s Islamists, the Ennahda Party, were much more moderate in their approach to power and dealing with their political opponents, but they are nonetheless having trouble delivering on their promises in government.

Rachid Al Ghanouchi and his fellow Brotherhood member, after years of forced exile escaping the persecution of Zine El Abdine Benali’s regime, were probably not ready for government after the ousting of the dictator. Yet, being the most organized political force in their country, just like in Egypt, it was clear that they would become a key political player in post-revolution Tunisia.

After two years of heading a coalition government, Ennahda and its two other allies failed to safely lead the country out of a stormy transition phase. The economy didn’t recover and security became a national concern after the assassination of two opposition politicians and the rise of religious radicalism and terrorism activities.

The Ennahda led-government is now under fire and the opposition is increasing its pressure to force it to resign. Much time has been wasted because of the two sides’ mutual quarrel and unless a consensus is reached Ennahda would remain, whether they like it or not, as part of the deadlock.

Morocco’s Islamists have had rough times as well. Still, compared with the ordeals of their Egyptian and Tunisian counterparts, Justice and Development Party (PJD) leaders have been luckier, with some high points which have softened the blow of its major mistakes.

The PJD led-government has had enough trouble delivering on the promises the Islamists made during the pre-election campaign when they promised achieving 7% growth and took up a much harder task of “fighting corruption”.

Despite the draft of a new constitution that supposedly gave more prerogatives to the head of government and the parliament, it seems very clear that this is not the order of the day behind closed doors. Abdelilah Benkirane, the head of government, certainly has no real power over many state institutions such the Ministry of the Interior and the state media. Perhaps most damaging in terms of legitimacy, the judiciary isn’t at all independent from political influence.

The PJD’s fall out with the Istiqlal Party that led to the latter’s withdrawal from the government coalition, which has become a minority one,, added to King Mohamed VI’s public criticism of it on a broadcasted TV speech and other mishaps indicate the extent to which the relationship between the monarchy and the Islamists have deteriorated.

In fact their relationship wasn’t very good in the first place. The regional context of the “Arab Spring” paved the way for Moroccan Islamists to be accepted in government, an option the state had avoided on several occasions by mandating the PJD to reduce the number of its candidates in the general elections.

The recent military crackdown on Egypt’s Islamists, which major Western countries seemed to not mind, and the troubles the Tunisian ones are currently facing has raised an alarm with their Moroccan counterparts. They’re worried now that the deep state would probably make things even more difficult for them than has been the case so far.

By doing so the deep state is playing with fire. PJD, whose members are mostly educated Arabophone middle class citizens, has become among large numbers of Moroccans from all walks of lives discontented with previous governments. It’s also a party which has overly been pro-monarchy while the latter hasn’t been as much sympathetic.

Trying to sabotage their job would further drive Moroccans to lose faith in politics. It’d also give credit to the more radical Islamist group, the Justice and Charity Party, who have more members and demonstrated better organization skills. They claim that the monarchy isn’t ready to implement, or rather allow, any real reforms.

The Justice and Charity Party members don’t recognize the monarchy’s religious authority and want to replace it with their utopic Islamic state of “Khilafah”.With all that said, it is important to underline two conclusions: Islamists’ experience in government in Egypt, Tunisia and Morocco has dealt a crushing blow to Arab people at a time when we cannot afford any more frustration and disappointment.

Yet, their foes’ attempts to exclude them from politics by using the most illegal and cruel means possible because they can’t stand rivals for power or can’t represent a viable alternative for the toiling masses is a dangerous game that puts those countries’ stability and future at stake.Political Islam remains a major component of modern Arab society. It’s true that its performance in government has shown its ideological limitations and further revealed the populist side of its political discourse.

Still, trying to marginalize it from the political stage is a risky business. It still enjoys popularity among large bases in society. Excluding those groups would mean driving many of them, especially the youth, to adopt more hardline positions.Furthermore, let’s not forget that many national, liberal and socialist governments haven’t produced any better results during decades in power.

The present attacks these governments direct at Islamists are an indicator of their failure to fairly compete and beat them in the political arena. Islamist movements, on the other hand, are at a crossroad where they must rethink their rhetoric and approach to power in order to regain much of their lost credibility. 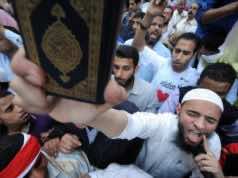 Islamism: The challenge of Pluralism and Political Opposition