CAIRO - Egypt's military says it has seized caches of weapons in a Sinai operation including a mortar apparently belonging to the Palestinian Islamic Jihad group in neighbouring Gaza. 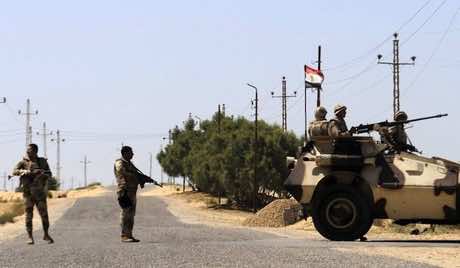 CAIRO – Egypt’s military says it has seized caches of weapons in a Sinai operation including a mortar apparently belonging to the Palestinian Islamic Jihad group in neighbouring Gaza.

The military has launched a sweeping offensive in the north of the peninsula to quell an Islamist militant insurgency that surged after the army deposed president Mohamed Morsi in July.

In a picture of seized weapons posted on its spokesman’s Facebook page on Sunday, three soldiers stood next to captured machineguns and mortars.

One mortar had a scale used for aiming with the caption “Saraya Al Quds”.

That is the military wing of the Palestinian Islamic Jihad movement, which had previously defied the ruling Hamas movement by firing rockets at Israel when Hamas wanted a truce.

Egyptian authorities say the Sinai militants, who have launched attacks on Israel from Egyptian territory, are linked to extremists in Gaza.

An Al-Qaeda-linked group in Sinai on Sunday claimed responsibility for a failed assassination attempt against Egypt’s interior minister last week, in which a bomb targeted his convoy.

The claim by Ansar Beit al-Maqdis came as the military conducted air strikes on militant hideouts in Sinai.