BENGHAZI, Libya- - A blast killed a police colonel in Benghazi on Tuesday, a security services spokesman said, the latest in a string of attacks against police and soldiers in the eastern Libyan city. 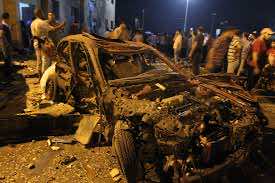 BENGHAZI, Libya- – A blast killed a police colonel in Benghazi on Tuesday, a security services spokesman said, the latest in a string of attacks against police and soldiers in the eastern Libyan city.

Benghazi was the cradle of the 2011 revolt that toppled and killed dictator Moamer Kadhafi, but it has been hit by a wave of deadly attacks against security forces personnel.

“Colonel Salem al-Orfi was killed when his car exploded in the Assalam neighbourhood. One person who was driving was seriously injured,” spokesman Colonel Abdullah al-Zayedi said.

Zayedi added that it was still unclear whether the blast was the result of “an explosive device placed on the car or rocket fire”.

The spokesman said Orfi was an officer in the Internal Security Agency, the body that tracked opponents to the Kadhafi regime, notably Islamists.

Some police and army officers targeted in previous attacks in the city had worked in the security forces during Kadhafi’s reign.

The attack on Ammami came days after the killing of Azzedine Koussad, a presenter for another television channel in the city.

Libya’s new rulers have struggled to re-establish order and form a professional police force and army since Kadhafi’s overthrow but they face former rebel fighters who refuse orders to heed authorities.