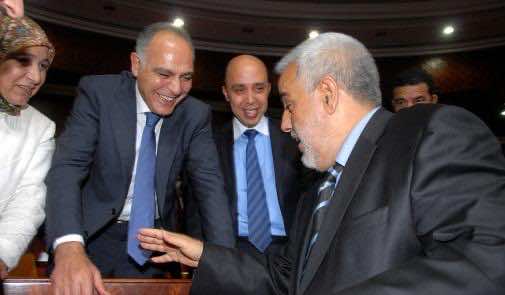 As an observer of Moroccan politics I can’t help scratching my head. The ongoing negotiations between the Justice and Development Party (PJD) (which heads the government) and the National Rally of Independents (RNI) (which is most likely to join it) is one of those moments where national politics aren’t making much sense.

The PJD is negotiating with the RNI in order to maintain a majority government after the Istiqlal Party switched to the opposition. That of course is obviously normal since one party wants to preserve its government and the other is looking for assuming a share in power.

But what’s annoying is the two sides’ rhetoric which gives the impression that their previous rivalry is weighing on the current discussions to become allies.

Many PJD members expressed their total rejection to RNI’s president Salehedine Mezouar’s appointment as a Minister of Finance. They denounce him as a “corrupt” former minister who was illegally exchanging bounties with the General Treasurer Nouredine Bensouda.

The Islamist party members are urging their Secretary General and Head of Government Abdelilah Benkirane to make sure Mezouar isn’t back in the ministry. They say they would rather see somebody else take the job even if he’s not from PJD.

According to this state of mind, Mezouar could be minister of another department. The question is: If he’s a corrupt person, why should he be trusted with any ministry no matter how much less its “strategic” importance is in the PJD’s opinion?

Another odd point is how the parties feel about each other. PJD leaders feel they were forced to negotiate with RNI since they didn’t predict that one of their allies would walk away from them one day at such a critical moment.

They have not been on good terms with the RNI in the past three years or so while they enjoyed pretty good relations with their other two allies the Popular Movement (MP) and Istiqlal (at least until Hamid Chabat became secretary general of the latter) and had much esteem for Party of Progress and Socialism (PPS).

The two parties had a fierce confrontation during last parliamentary elections in 2011. RNI was at the top of a loose and heterogeneous coalition of eight political parties that Islamists saw as directed at preventing them from winning elections.

Being an “administrative” party, the word used in Moroccan political glossary to designate parties created by the state, RNI apparently was being prepared to lead the government. The Arab Spring, being more in favor of Islamist forces, paved the way for the PJD to finish first and be placed in charge of forming a government. Salehedine Mezouar’s dream of being head of government was shattered.

Relations between the two parties had deteriorated even before that the election. Mezouar became a president of RNI after a “coup” against former president Moustapha Mansouri led by his party members apparently because the monarchy wasn’t in favor of his rapprochement with the PJD.

When Mezouar became RNI president, the party became very close to the Authenticity and Modernity Party (PAM), another “administrative” party, which Islamists believe its main mission is to counter their rising popularity. PAM, which was created by the King’s friend and current advisor Fouad Ali El Himma, was enormously invigorated by the state to be the number one political party in the country.

When the 20 February Movement was leading popular demonstrations as part of the Arab Spring it denounced PAM and its founder as being corrupt. This explains why RNI was presented as a front runner of the eight-party coalition which was mockingly nicknamed by national press: the “G8”.

PJD members are certainly aware of all that. Their Secretary General and Head of Government Abdelilah Benkirane is also aware that “politics is the art of the possible”, and that the almost possible option in such circumstances is in getting RNI into his government coalition if he wants to save it.

RNI leaders are smart as well, so they’re trying to score as many points as possible against the PJD. They won’t forget that they couldn’t win a “war” they chose to wage against a party which is more organized than they are and have clearly a more popular base.

In midst of all this, the country finds itself in the waiting room. The failure of negotiations between the PJD and RNI means holding snap elections. This is a scenario everybody wants to avoid because it would give indications that Morocco isn’t really as stable as it seems.

RNI’s joining the government will be then a better solution for the party itself, the PJD and the country as a whole. Yet, the tensions that marked the two parties’ relationship and the Makhzen’s clear involvement in the reshaping of Benkirane’s government raise questions on how likely such a coalition can hold on?

As far as I’m concerned, I don’t see how it can.