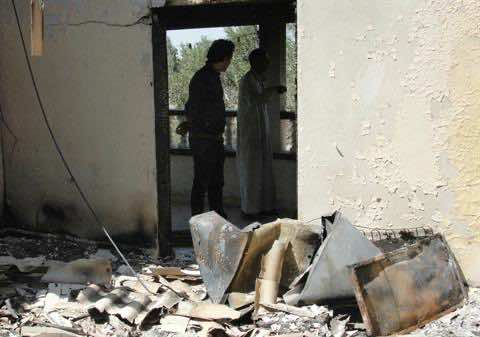 Security officials said an explosion targeted the military intelligence headquarters in Rafah on the border with the Gaza Strip, minutes before a second explosion hit an army checkpoint nearby.

Military spokesman Ahmed Aly said in a statement the blasts were caused by car bombs.

The military intelligence headquarters is located in a high-security military zone and surrounded by checkpoints, sources in Rafah said.

The Rafah border crossing — the only gateway into the Palestinian enclave that bypasses Israel — was shut and all roads in and out of the town were closed as armed forces combed the area for suspects.

The attacks come just days after an Al-Qaeda inspired group in the Sinai peninsula claimed credit for a Cairo bombing that targeted the interior minister last week, pledging more attacks.

The military has poured troops and armour into Sinai to quell Islamist militant activity which surged after the army overthrew Islamist president Mohamed Morsi on July 3.

A subsequent crackdown on Islamists by authorities left hundreds dead.

In its weekend statement, the Ansar Beit al-Maqdis group — Partisans of Jerusalem in English — had blamed interior minister Mohammed Ibrahim and army chief Abdel Fattah al-Sisi for the deaths of hundreds of Morsi’s supporters.

“We call on all Muslims in Egypt to stay away from all military and interior ministry installations to preserve their lives,” the statement said.