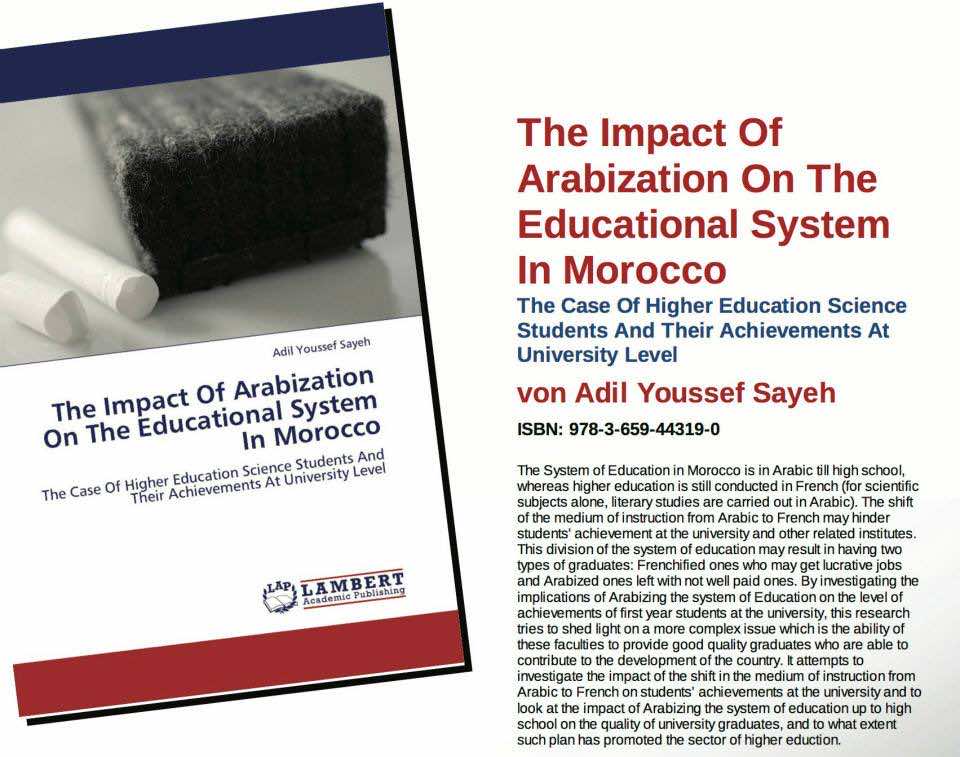 EL JADIDA, Morocco – One of the important pillars of any development is education. However in Morocco, this sector is still facing several problems. One of these problems, which still raises many debates, is the medium of instruction. Up to high school, Arabic is used as the medium of instruction. Maths, physics, science and other related subjects are taught in this language with the exception of some subjects related to the field of marketing and economy.

Graduating from high school, students who have been taught everything in Arabic take the same subjects with a different medium, French, in higher education. The impact of this shift on the level of students and their achievements at the university is carefully analysed in Sayeh’s book The Impact of Arabization on the Educational System in Morocco: The Case of Higher Education Science Students and their Achievements at University Level. The book tackles the issue of using two different mediums of instruction in basic and higher education to further shed light on the ability of Moroccan faculties and higher institutes to provide good quality graduates who are able to function in a still Frenchified Morocco where the most lucrative jobs necessitate a good mastery of French.

The book opens with an analysis the linguistic situation in Morocco since 1956. It elaborates, in terms of status planning, on different roles the successive governments played in implementing Arabization during the period between 1956 & 1980, then moves on to the Laraki plan. In terms of status planning, the book investigates the role IERA (Institue d’Etudes et de Recherches pour l’Arabisation) plays in re-establishing the Arabic language in different fields and especially in education. Throughout the investigation, factors hindering the implementation of Arabization are carefully analysed, especially in terms of methodology, and socio-political and socio-cultural ones. Other factors that have been discussed are the ones related to translation and terminology, and language system in Morocco.

The following section of the same chapter tackles the issue of Arabizing higher education and the economic and cultural implications it would engender. Also, it states the obstacles the process has faced in terms of knowledge production and the job market.

To further shed light on the linguistic situation in Morocco, the writer does not neglect to give a historic background on the school system in Morocco stressing the evolution of schools and universities and the place Arabic and French holds within each system since before the protectorate till nowadays.

The implications of the duality caused by the use of two mediums of instruction become the core of the investigation and by the end of the chapter, three main hypotheses have been developed. The first one is related to students’ competency in Arabic and French and its effect on their achievements at the university; the second one includes the possibility of using a third language, English, in education; and the last one tackles the consequences of having two different mediums of instruction on the job market.

The following chapter investigates these three hypotheses in three sections. Data have been collected by means of two interviews and a questionnaire. The two interviews are analysed question by question and then a summary is given at the end of each analysis. The findings from the questionnaire are scrutinised and then compared to the findings from the two interviews to further analyse the factors hindering students’ achievements at the university and students’ attitude towards the medium of instruction used at the university.

The last chapter is a summary and interpretation of the results. The findings revolve around three major axes: 1 the transition from high school to university, 2 the way French is taught in high school and 3 the role of language competency in social mobility.

Teaching in one language or another is conditioned by students’ mastery of this language. Using Arabic, French or English would not be successful, if not possible, unless students learn all the necessary skills that enable them to function in that language. This is one of the major points stressed in this book along with the importance of focusing on skills development in language teaching rather than content, which is the case of French in high school.

Link to the book