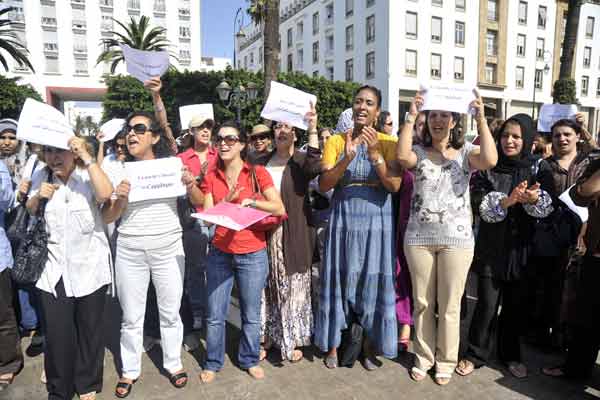 Washington- Most political life of marginalized groups are not generally collectively observing overt defiance of power-holders, nor are they submissively compliant—rather, they inhabit the vast territory between the two opposite poles.   Women’s activism in the Maghreb in this sense makes for an interesting case.

Throughout the various historical moments across the region, the post-colonial struggle, and more recently, the uprisings of the winter of 2010/2011, women have played important roles in catalyzing and facilitating dramatic political change alongside their fellow citizens: men.  Amid these tumultuous political climates gender distinction disappears, boundaries between public/private space, sexes, ages, etc are abolished.

Women become strategic and important elements in the new political [revolutionary, even] framework; the relationship between the sexes becomes more natural and dynamic, characterized by a collective consciousness.  How, then, can one explain women’s re-emergence into the shadows of sociopolitical life, post-political struggle, their relegation to the backstage of society, and its collective unconsciousness?

Specifically looking at Morocco leading up to and following the uprisings of 2011, women have emerged as distinctive and assertive political forces in the national discourse, though Moroccan women face social and political resistance to their integration as full citizens into the public sphere.  Having gained legal and constitutional rights on nearly equal standing with Moroccan men, Moroccan women need to seamlessly glide into the public sphere; meaning—running for political office with men as their equal competitors and navigating the public/social sphere with no resistance or backlash.

In this case, Moroccan women stand in the center of two sides of resistance: reluctance from the top to acknowledge and integrate women into politics as equal competitors to men, and adversity from the bottom to allow women to enter the public sphere as men do. Moroccan women cannot be expected to remain in the purgatory that the two sides [the top, political arena, and the bottom, male-dominated society] have forced them into; therefore how will Moroccan women break down the barriers imposed by state and society alike?

A further impediment to their integration into public affairs is the economic marginalization of Moroccan women.  A large population of Moroccan women have encountered debilitating limitations to realizing their positions in the public sphere for two major reasons: 1. A large population of women is confined to the rural sector of the Moroccan economy therefore limiting their opportunities for higher education and capping aspirations of high-level, skill-based jobs for many rural women; 2. Educated women in Morocco face high unemployment rates, gender discrimination in the workforce and the public sphere, and as a result of the two, the inability to achieve financial autonomy.

Women’s experience in Morocco is almost entirely determined by men on a day to day basis; because there is emphasis placed on how women should dress, act, speak, and present themselves in the public sphere, it depoliticizes, and to a certain extent, delegitimizes women as autonomous political beings.  The changes to legislation to incorporate women in public affairs is slow moving, the concessions being made by the monarch and the ordre du jour, are, just that—concessions, progress for the sake of progress. With women under-represented in the government, it is difficult to anticipate that any real effort to change this will come from the top.

The new Moroccan constitution, drafted after the mass protests in 2011, was designed to operate within a new constitutional framework that calls for fairness and equality within the hegemony of male culture.  Since males form the majority in political parties, when the time comes to select candidates to assume responsibility, women are sacrificed.  Not for want of qualified females, Bassima Hakkaoui, the sole female minister in the new Moroccan Parliament, in an interview with Asharq Al-Awsat shortly after her ministerial appointment stated that “if there are women leaders with high qualifications but were not nominated, this means that we did not succeed in combating the marginalization and exclusion of women; such a practice is the epitome of discrimination against women,” though in the same breath declared that she is a member of a team of remarkable equality, and feels no sense of discrimination from her male peers in parliament sessions.  This paradox is the quintessence of Moroccan state and society; individual experiences of women are highly circumstantial, while the overall female experience is tumultuous and archetypal of the male-dominated public sphere.

The gender-based space dichotomy first and foremost represents a power struggle, private space is culturally associated with subordinates [women and children] and public space with men who dictate the law, manage the state, and control the economy. Thus women, by entering the public sphere, create interdependence between the public and private spheres in which social justice depends on equality within the private sphere as well as outside of it; though this integration is not necessarily a natural one in places like Morocco.

If women do not push the boundaries, they will not naturally progress into the public sphere; with women asserting themselves into high-level jobs, jobs that push them into male-dominated spaces, they are like displaced people trying to assimilate in a foreign environment—the dynamic is unnatural.

The dilemma of power in Morocco is to nurture a new generation of political leaders who are obliged to take part in the conduct of public affairs and integrate the state into social affairs and who have no assurance that they can change the basic orientation of political life due to the nations’ political past.  However, the political climate, and especially women’s politics, in Morocco has witnessed some telling changes in the past year that could be a harbinger for times to come. In the meantime, what can be done to ensure that women will be a perpetual force in the political arena?

Gender Diversity to Pump $30 Billion in Moroccan GDP by 2025