ISTANBUL-  Turkish Prime Minister Recep Tayyip Erdogan said on Thursday that Islamophobia was a kind of racism such as the other forms of discrimination by describing the term as a crime against humanity. 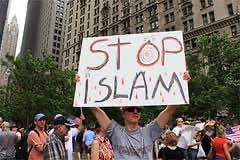 ISTANBUL-  Turkish Prime Minister Recep Tayyip Erdogan said on Thursday that Islamophobia was a kind of racism such as the other forms of discrimination by describing the term as a crime against humanity.

Releasing a message on International Conference on Islamophobia: Law and Media which is being held in Istanbul, Erdogan stated that the Islamic concepts were used as a negative way bringing defamatory, dismissive and alienating connotations in the western world.

Stating that Islamophobia was embittered via movies, soap operas, music, media, photographs even with unofficial articles and essays, Erdogan said 9/11 caused an enemy perception against “Islam” in the western world.