Washington- One of the oldest living people on Earth is Mr. Kaddouri Maksouri, a native of Morocco, and almost 123 years old—reports the Moroccan monthly magazine in its August-September issue. 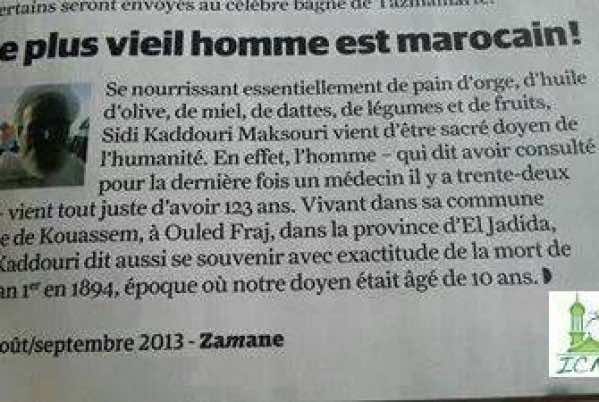 By
Nadia ELBOUBKRI
-
Nadia Elboubkri is a graduate of Temple University where she holds a Bachelor of the Arts in Political Science with a focus on Middle Eastern studies and political economy.
Sep 13, 2013
Spread the love

Washington- One of the oldest living people on Earth is Mr. Kaddouri Maksouri, a native of Morocco, and almost 123 years old—reports the Moroccan monthly magazine in its August-September issue.

Born in the Moroccan commune of Kouassem in Ouled Fraj located in the province of El Jadida, Maksouri can remember the exact moment he heard the news of King Hassan I’s death—in 1894.

Maksouri’s secret to living such a long life in good health, he says is his consistent diet of barley bread, olive oil, honey, dates, vegetables, and fruit. A testament to his healthy lifestyle, Maksouri hasn’t visited a doctor in over 32 years.

Maksouri is one of very few people to live over a century long. Huffington Post reported an Ethiopian man claiming to be 160 years old.  Birth records have also been verified for Carmelo Flores, a 123 year old Bolivian man.