WASHINGTON - Last week an 8 year old Yemeni girl died of injuries she sustained from consummating her forced marriage with a 40 year old Saudi man that had bought her from her stepfather. 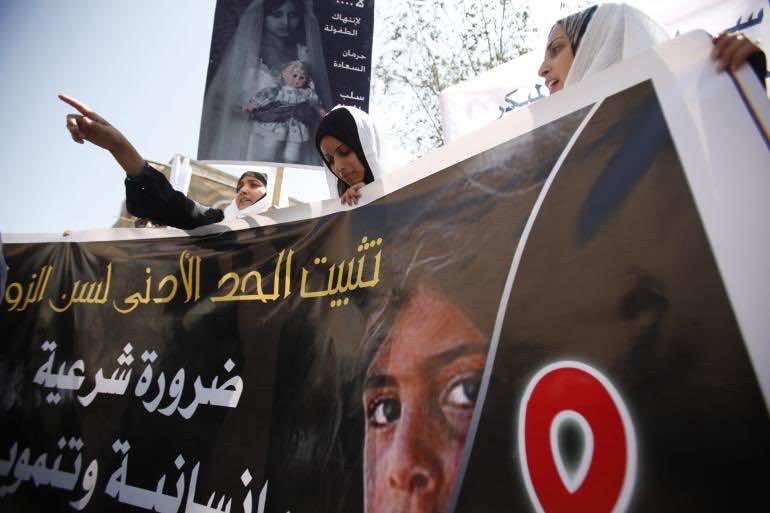 By
Nadia ELBOUBKRI
-
Nadia Elboubkri is a graduate of Temple University where she holds a Bachelor of the Arts in Political Science with a focus on Middle Eastern studies and political economy.
Sep 13, 2013
Spread the love

WASHINGTON – Last week an 8 year old Yemeni girl died of injuries she sustained from consummating her forced marriage with a 40 year old Saudi man that had bought her from her stepfather.

Today, the Yemeni Human Right’s Minister has called on parliament to pass a law to set a minimum age for marriage and prevent future child marriages and exploitation.

The widely publicized case of the young Yemeni girl, named Rawan, has been swept up in a storm of international shock, outrage, and drama surrounding the state of Yemeni human rights and childrens’ rights.

In a statement by the European Union’s External Action committee, High Representative Catherine Ashton expressed her disbelief at the situation: “I am appalled by reports of the death of an 8 year old Yemeni girl from serious injuries including internal bleeding, sustained on her wedding night.”

She also called on the Yemeni state to reevaluate its legislation on child marriages; saying, “I call on the Yemeni government to abide by its obligations under international law, including the UN Conventions protecting the rights of the child, of which Yemen is a member, and to immediately reinstate legislation setting a minimum age for marriage, in line with international norms, to prohibit such abuse of children.”

Rawan is not the first in Yemen to be subjected to forced marriage with adults more than 3 or 4 times their age. This raises the question of whether or not the international community would have gotten involved in the case of child marriages in Yemen if the Rawan’s case had not been so broadly publicized.

Despite international outcry over Rawan’s death, Yemen is still divided on the issue of minimum ages for marriage.  Some claim that setting a minimum age goes against the country’s traditions and religious value. However, there are religious clerics as well as human rights groups working on expediting the legislation to move forward.