CASABLANCA - Protests against Hamid Chabat, the mayor of Fez, that began in Fez four months ago, have since moved to the capital city of Rabat. 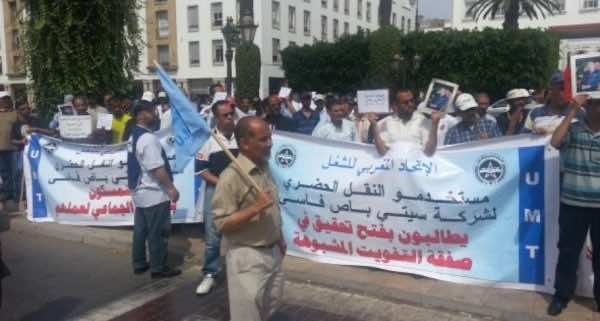 By
Jamal Saidi
-
Jamal Saidi is an English teacher.
Sep 13, 2013
Spread the love

CASABLANCA – Protests against Hamid Chabat, the mayor of Fez, that began in Fez four months ago, have since moved to the capital city of Rabat.

While many employees of the city’s bus companies took their fight to Rabat, others, in particular, women, stayed in Fez asking persistently for King Mohamed VI’s intervention.

On Wednesday, demonstrators chanted slogans against Chabat, who is also the secretary general of Independence party, Istiqlal, during a sit-in in front of the parliament and headquarters of the party. The protesters demanded that the Minister of Interior open an investigation to uncover the circumstances through which City Bus Company was contracted to manage urban transport—a contract meddled with what they described as “violations” in the management of a number of files.

Last May, hundreds of workers affiliated with City Bus launched a strike and an open-ended sit-in, after which they were collectively dismissed. Local authorities refused to legally recognize their union office, which belonged to the Moroccan Labor Union, following their collective resignation from a trade union with which Hamid Chabat is affiliated.

Demonstrators stressed their determination to continue the protest until the there is a complete overthrow of corruption in the city of Fez, and the departure of City Bus Company.

City Bus Company replaced what was originally known as the Autonomous Agency for Urban Transport (a public entity) in a deal described by employees as “shady.” The company later expelled 600 workers in response to their initial strike.

It is worth noting that the Independent Agency for Urban Transport of Fez went bankrupt due to a budget deficit that reached 25 million dirhams in the year of 2010. Sources close to the company have been called on to open an investigation into the bankruptcy, which is believed to be a result of corruption.

Meanwhile, dozens of women protested in the city of Fez in support of their husbands and colleagues. A video has been circulating on the internet depicting angry women shouting in protest against their deteriorating living conditions. They addressed king Mohamed VI directly, insisting on his urgent intervention: “Your majesty, this is a farce,” a protestor persistently emphasized.

The protestors hoped that the monarch would never accept such oppression and iterated that he remained  their  last hope. “It is us who love the king. We receive him under the burning sun. We love him to death. It is the ordinary worker who loves him. Whereas, they are hypocrites, thieves and corrupted” one woman said.

The demonstrators asked  for protection within the framework  of women and children’s rights as those two categories of society  are badly affected and ,as a result, their rights are frequently violated.

The women lamented that they can no longer bear the staggering weight of the current conditions, facing harsh financial difficulties. “They protect drug dealers and corrupted people; What about us ? Who is going to protect us ?”  a woman bitterly asked.