CAIRO  - An Egyptian court on Saturday adjourned to October 19 the retrial of former president Hosni Mubarak, his two sons, his interior minister, six security officials and a businessman in charges of killing peaceful demonstrators during the 2011 uprising and squandering public funds. 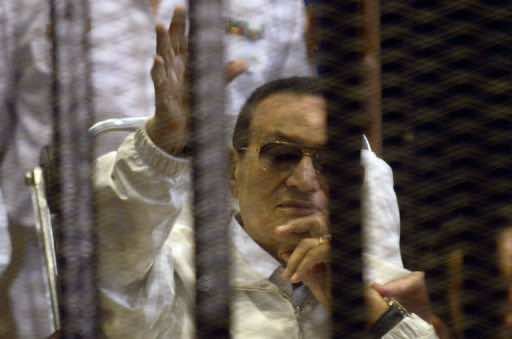 CAIRO  – An Egyptian court on Saturday adjourned to October 19 the retrial of former president Hosni Mubarak, his two sons, his interior minister, six security officials and a businessman in charges of killing peaceful demonstrators during the 2011 uprising and squandering public funds.

All defendants, except for businessman Hussein Salem, a close friend of Mubarak who has left Egypt before Mubarak’s downfall, attended the trial.

Mubarak waved with his hands to his supporters as he entered the courtroom, while his morale seemed to be high, according to an Anadolu Agency reporter.

This is the second session in Mubarak’s retrial since his release last month.

The toppled president was released in August after a court accepted his appeal against corruption charges. He was placed under house arrest at a military hospital in Cairo.

The retrial, which used to be held in Hall No. 1 at Egypt’s Police Academy on the outskirts of Cairo, was moved to another hall.

Academy sources told the AA that the retrial was moved to provide space for the trials of Muslim Brotherhood leaders in the days to come.

Outside the courthouse, few of Mubarak’s supporters showed up to show support for the ousted president.