TUNIS- Tunisian public prosecutor Tarek Chkioua, under fire for pursuing cases against journalists, has been promoted to the country's Court of Appeal, a justice ministry list shows. 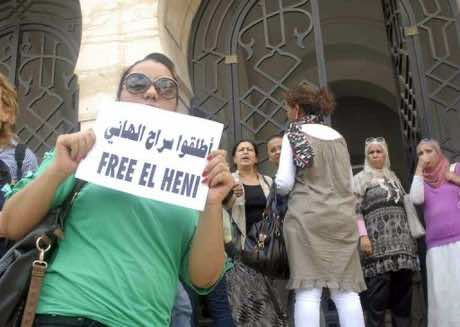 TUNIS- Tunisian public prosecutor Tarek Chkioua, under fire for pursuing cases against journalists, has been promoted to the country’s Court of Appeal, a justice ministry list shows.

Currently prosecutor in the capital’s court of first instance, he now becomes advocate general in the country’s highest judicial body. Chkioua has been fiercely criticised by rights groups for prosecuting cases that have resulted in journalists and a trade unionist being arrested.

Journalist Zied el-Heni was detained on Friday for accusing him of fabricating evidence implicating a cameraman in an egg-throwing attack on a minister last month. The cameraman spent three weeks in prison before being released on bail last week. The egg-thrower — a film-maker — remains in custody.

Chkioua was also behind the detention of trade unionist Walid Zarrouk, who had accused him of being in the pay of the Islamist Ennahda party, which heads the ruling government coalition. In Heni’s case, the Association of Tunisian Magistrates criticised the procedure that led to the journalist being incarcerated, ruling that Chkioua’s complaint against him had been filed at the court in which he works.

“Being both judge and party to the case, there could have been no equitable ruling,” an association statement said. In the above cases, the defendants were detained for defaming or slandering officials, offences which can result in prison terms for those convicted.

Ennahda, the judiciary and police have been slammed by the opposition and civil groups for allegedly trying to stifle freedoms of expression won in the 2011 revolution that sparked the Arab Spring. Two rappers were convicted at the end of August and sentenced to 21-month jail terms over songs deemed to be defamatory towards the police force.

The singers — who are on the run — had not been told there were charges against them, let alone that there was a trial. Heni may be freed on bail on Monday, one of his lawyers said on Friday. However, the national union of journalists has called a general strike for Tuesday, only the second in its history, to protest Heni’s detention and to denounce government pressure on the media.

Since early 2012, Human Rights Watch said the authorities have used the same “repressive legal arsenal” to stifle free speech that was employed by the regime of ousted dictator Zine El Abidine Ben Ali. HRW said that “numerous journalists, bloggers, artists, and intellectuals have been prosecuted”.