Washington- A recent ad campaign launched by Diesel is certainly shading the area between cultural appropriation and sensationalism grey—an ad which features a naked, tattooed woman wearing a denim burqa with the slogan: “I am not what I appear to be.” 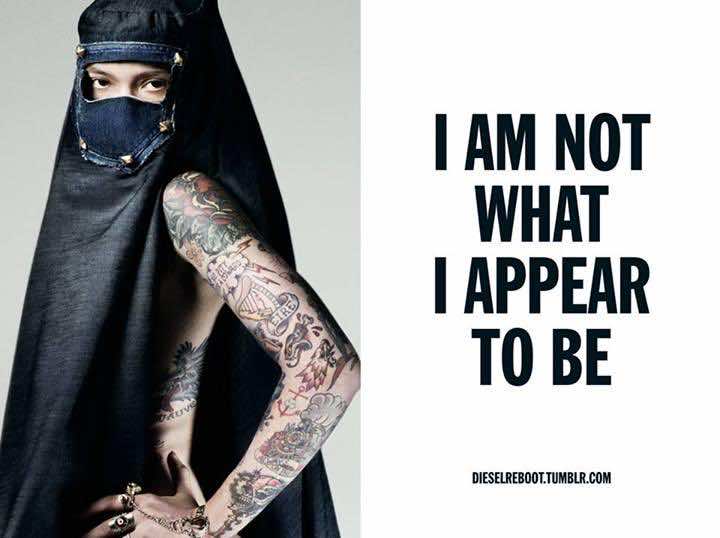 By
Nadia ELBOUBKRI
-
Nadia Elboubkri is a graduate of Temple University where she holds a Bachelor of the Arts in Political Science with a focus on Middle Eastern studies and political economy.
Sep 14, 2013
Spread the love

Washington- A recent ad campaign launched by Diesel is certainly shading the area between cultural appropriation and sensationalism grey—an ad which features a naked, tattooed woman wearing a denim burqa with the slogan: “I am not what I appear to be.”

Is the burqa making its way into pop culture? Naturally, Diesel’s bold fashion venture did not go unnoticed. Shruti Parekh of MTV Desi expressed her disbelief at Diesel’s insensitivity to Muslim women who wear the burqa for religious reasons as well as for modesty.

“Putting a white, non-Muslim woman in a burqa in our current global context is one level of disrespect, but making her topless takes it to a level that is hard for me to comprehend,” she says.

To Parekh, the ad is flaunting Western “privilege.” The way that Diesel took it upon themselves to don a woman in a burqa was in poor taste—and on top of that, they sexualized the image, and attached a slogan that implies rebellion with a subversive sub-text.

Would an ad like this ever be accepted in the global community had it been created by a Muslim woman? Parekh believes that, “this image would mean something drastically different if it was created by Muslim women, and if the woman was actually a Muslim model in the context of a fundamentalist Islamic regime.  It might be radical, bold, and subversive. It might actually be an empowered assertion of women’s sexuality.”

Diesel’s disregard for the symbolism of the burqa—symbolic for many people in many different ways—shows the Western world’s inability to find the line between appropriate ways to address religion, and inappropriate ways.

This applies especially to the burqa, and the niqab, which generally are portrayed as symbols of oppression or patriarchy in the mainstream media. But once taken out of their religious context and placed on a naked, tattooed woman, suddenly a burqa is artistic, sexual, edgy, and bold.