WASHINGTON-  Hundreds of people were reportedly missing as floods devastated homes and businesses in Colorado, pushing the confirmed death toll to five and forcing thousands to evacuate. 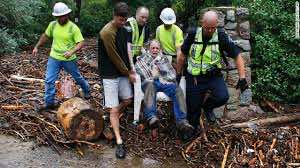 WASHINGTON–  Hundreds of people were reportedly missing as floods devastated homes and businesses in Colorado, pushing the confirmed death toll to five and forcing thousands to evacuate.

Flooding in Boulder, which is confirmed to have killed at least four people, apparently claimed the life of a fifth — a 60-year-old woman swept away in the torrent.

Helicopters circled above submerged houses in a search of survivors Saturday, with the whereabouts of hundreds of people still unknown.

Officials said part of the challenge of pinning down who was in need of help, is that communications systems in many areas were not working, after many cell phone towers were damaged in the flooding.Meanwhile, new flash floods were expected to inundate the area, as thousands evacuated.

“We do estimate that potentially there will be other loss of life,” said Nick Christensen, executive officer of the Larimer County Sheriff’s Office, during a Saturday afternoon press conference.

Officials said there were widespread power outages as streets became raging rivers after the state received months’ worth of rain in just a few days.

Rain began pelting the state earlier this week, in Boulder, with 7.2 inches (18.3 centimeters) of precipitation in about 15 hours beginning Wednesday night, with more downpours likely over the course of the weekend.

Pictures from helicopter cameras showed heavy rain had reduced the towns of Jamestown, Lyons and Longmont to little more than islands, with ready-to-eat meals being dropped to stranded, anxious residents below.

Search and rescue teams are being deployed to assess the situation and contact stranded residents, officials said.

The US National Guard provided seven helicopters Saturday to help get people out of danger. Some 1,200 people were being pulled out of the Pinewood Springs area, the sheriff’s office said in a statement.

But many others are still awaiting pick up, and authorities said that rescue for some could take days.

The Denver Post newspaper, citing the Boulder Office of Emergency Management, reported that the number of people who were unaccounted for had risen to 350 by Saturday afternoon, up from 230 earlier in the day.

The newspaper cautioned, however, that those numbers were fluid because “some people who were unaccounted for have been able to finally make contact with friends or family.”

The figures had increased following more reports of missing persons being posted with the authorities.

Christensen, however, declined to put a number on how many people were classified as unaccounted for.