CAIRO - A natural gas pipeline running between the capital Cairo and the Suez Canal city of Ismailia was attacked by unidentified gunmen for the second time in a week, a security source told the Anadolu Agency on Sunday. 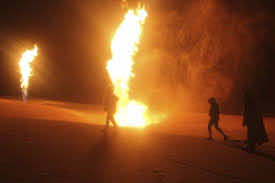 CAIRO – A natural gas pipeline running between the capital Cairo and the Suez Canal city of Ismailia was attacked by unidentified gunmen for the second time in a week, a security source told the Anadolu Agency on Sunday.

According to the source, militants detonated an explosive charge attached to the pipeline, bringing the gas supply to the three Suez Canal cities of Ismailia, Suez and Port Said as well as the Sinai Peninsula to a halt.

The attack came four days after militants opened heavy machine gunfire at the pipeline, putting it a blaze.

No group has claimed responsibility for either attack.