Sidi Ifni- A "degrading" photo was taken of a primary school headmaster riding a mule on his way towards his place of work, Aadala school, on the outskirts of Taounat (60 km from Fez). 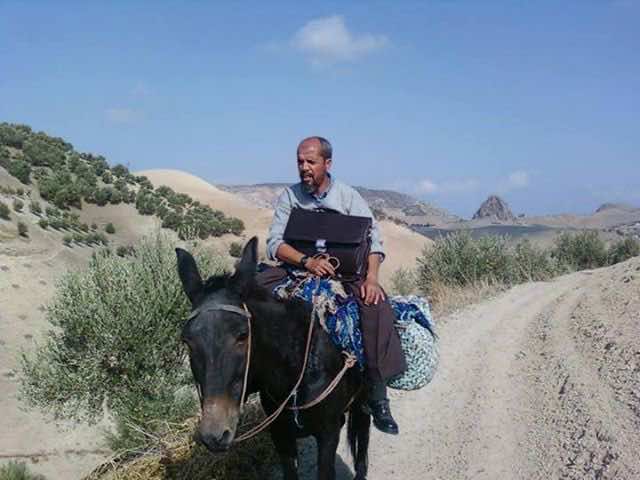 Sidi Ifni- A “degrading” photo was taken of a primary school headmaster riding a mule on his way towards his place of work, Aadala school, on the outskirts of Taounat (60 km from Fez).

The picture, which went viral on Facebook , drew teachers’ attention to their difficult working conditions.

The heart-rending scene instantly led many people to react against the so-called reform the Moroccan government has promised to bring about in public education.

“Shame on the Education Ministry! Is this a headmaster or a farmer? Believe it or not, headmasters, including teachers, have no dignity on this land; how can education move forward? ” a teacher, who asked to speak on the condition of anonymity, told MWN.

Despite the fact that the government promised to reap some of the fruits of the Emergency Plan in 2013, some poignant scenes of this sort appear from time to time only to provoke and dig up the concealed reality about our education.

At first sight, this picture seems to bring us back to the Stone Age where people used to ride animals to reach their destinations.

“It is a calamity! How come a headmaster rides a mule! How can he be respected by the society? How can we call the profession he practices noble if he is considered ignoble by the Ministry,” a female adult teacher told MWN.

According to the villagers, the headmaster commutes on a mule every day.

Yet, the professional conscience of the headmaster, some of his colleagues admitted, never induced him to neglect his work and abandon his profession.

This ignominious scene poses a number of questions, chief of which is: Do not teachers and headmasters deserve dignity, respect and gratitude, for doing the most noble profession on earth?