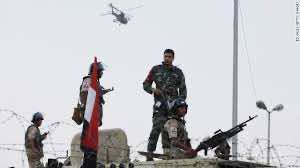 Soldiers and police entered the town of Delga in the central province of Minya, firing tear gas and searching homes for suspects, a security official told AFP.

By Monday afternoon, 56 people had been arrested and several weapons seized, the official said.

All 32 entrances to the village were shut and a daytime curfew imposed as authorities recaptured the town of 120,000 people, held for 31 days by loyalists of ousted Islamist president Mohamed Morsi, according to the official MENA news agency.

Rights groups had slammed the security forces’ slow response in dealing with the crisis.

Since the siege of the village began, three churches were torched, dozens of Christian homes burned and two Copts killed, according to Ishak Ibrahim, a researcher with the Egyptian Initiative for Personal Rights.

At least 100 families also fled the town fearing for their lives, Ibrahim said on his Twitter account.

The raid on the town comes amid a massive crackdown on Islamists following the military’s ouster of president Morsi on July 3, which plunged the country deeper into turmoil.

In mid-August police and soldiers broke up two massive pro-Morsi protest camps in Cairo in an operation that killed hundreds and further polarised the country.

The transition plan set up by the army-backed interim government stipulates fresh parliamentary elections and a presidential vote by mid-2014.