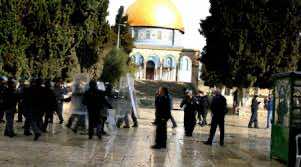 Scores of Jewish settlers on Monday stormed the Aqsa Mosque compound in the holy city of Al-Quds (Jerusalem).

A total of 132 Jewish settlers, including 42 intelligence agents, toured the compound while listening to lectures on the history of the alleged “Temple Mount,” according to the Aqsa Foundation for Endowment and Heritage.

One day later, scores of Jewish settlers – backed by Israeli security forces – stormed the compound and performed Jewish prayers at the site.

The Knesset (Israel’s parliament) had earlier called for opening the compound to Jews on all Jewish holidays.

Jews refer to Al-Aqsa as the “Temple Mount,” claiming the area had been the site of two Jewish temples in ancient times.

They believe their messiah will not arrive until a third temple is built on the site.

Meanwhile, the Aqsa Foundation warned of attempts by Jewish groups to storm the iconic mosque during the Jewish holidays, which run from September 8 to 25.

The foundation said that Jewish groups campaigning to build a Jewish temple on the site “are penetrating all segments of Israeli society to propagate [the idea of] their alleged Temple Mount and to push for a stepped-up Israeli presence at the mosque.”

The Aqsa Foundation called on Palestinians to intensify their presence at the holy site in order to counter “the methods being used by Temple Mount groups.”