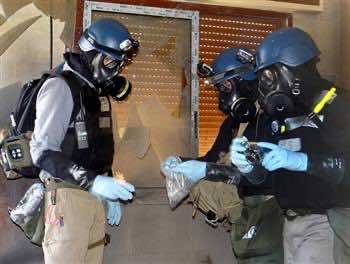 United Nations inspectors team concluded on Monday in their report that there is “clear and convincing evidence” that chemical weapons were used on a relatively large scale in August 21 chemical attack on civilians in the suburbs of the Syrian capital of Damascus.

According to AP news agency that obtained the first page of the report, the UN inspectors team stated that “the environmental, chemical and medical samples we have collected provide clear and convincing evidence that surface-to-surface rockets containing the nerve agent sarin were used in the Ghouta area of Damascus” on August 21 .

The mentioned areas in the report are Ein Tarma, Moadamiyeh and Zamalka of the Syrian capital.

“The conclusion is that chemical weapons have been used in the ongoing conflict between the parties in the Syrian Arab Republic against civilians, including children, on a relatively large scale,” the UN inspectors noted on the first page of their report to UN Secretary-General Ban Ki-moon.

Secretary-General Ban is due to present the report to the UN Security Council later on Monday.