TUNIS- Tunisian journalists went on strike Tuesday to protest pressures imposed on them by the authorities, after a reporter was arrested for accusing the public prosecutor of fabricating evidence against a cameraman. 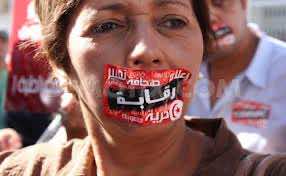 TUNIS- Tunisian journalists went on strike Tuesday to protest pressures imposed on them by the authorities, after a reporter was arrested for accusing the public prosecutor of fabricating evidence against a cameraman.

The country’s newspapers all ran with headlines announcing the strike.

“Tunisian journalists are sick and tired, but they are not giving up,” Le Temps announced on its front page, with Le Quotidien proclaiming that “The battle for freedom of expression rages.”

“They can stifle freedom, they can restore the rule of terror insidiously, but the warning shots of revolt will be heard,” warned La Presse.

Radio stations only broadcast information related to the general strike, as requested by the national journalists union, which called the industrial action, only the second in its history.

The official TAP news agency also said it would offer a “minimum service, only covering events of extreme importance.”
Striking journalists are expected to gather outside the SNJT headquarters in the capital at 1300 GMT.

Heni was placed in pre-trial detention on Friday for accusing the public prosecutor of fabricating evidence implicating cameraman Mourad Meherzi in an egg-throwing attack on a minister last month.

The cameraman spent three weeks in prison before being released on bail, while the egg-thrower — a film-maker — remains in custody.

Heni was freed on bail on Monday, but his detention, which follows the prosecution of other journalists, media organisations and artists, angered the country’s unions and journalists.

Ennahda, the judiciary and police have also been repeatedly accused by the opposition and civil society groups of trying to stifle freedoms of expression won in the 2011 revolution that sparked the Arab Spring.

Two rappers were convicted at the end of August and sentenced to 21-month jail terms over songs deemed to be defamatory towards the police force.

Media rights in Tunisia are theoretically governed by two decrees adopted after the revolution, designed to guarantee press freedom and regulate audiovisual media.

But the public prosecution continues to rely extensively on the penal code inherited from the ousted regime of Zine El Abidine Ben Ali and still in force, under which press offenses can be punished by jail terms.