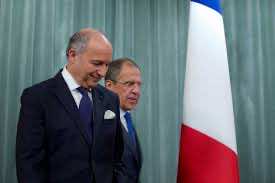 After the UN chemical investigators had confirmed the use of sarin nerve agent in August 21 attack near the Syrian capital of Damascus, Russia and France disagreed over who is to blame for the attack in Syria.

“When you look at the amount of sarin gas used, the techniques behind such an attack and other aspects, it seems to leave no doubt that the regime is behind it,” French Foreign Minister Laurent Fabius told reporters after talks with his Russian counterpart Sergei Lavrov in Moscow.

But Lavrov, whose country has been the Syrian government’s most important ally, said they had “serious grounds” to believe the attack had been a provocation by rebel forces.

“We want objective professional assessment of the events of 21 of August. We have serious grounds to believe this was a provocation. But the truth needs to be established and this will be a test of the future work of the Security Council,” Lavrov told in a joint press conference with Fabius.

The UN report released on Monday did not say who launched the attack, though the United States, Britain and France said proved government forces were responsible.

Russian minister also stated that they would not support any resolution that would authorize the use of force against Syria if it doesn’t comply.

But France’s Fabius is pressing Russia to support a Security Council resolution on Syria.

The UN Security Council is expected to draft a resolution for the Syrian deal in the coming days.

Since the uprising against President Assad began in 2011, more than 100,000 people were killed in Syria.

Millions of Syrians fled the country, mostly to neighbouring nations and millions more have been internally displaced within Syria.