On a recent visit to Egypt, Lebanese diva singer Haifa Wehbe displayed her love and support for the military by posing next to a soldier on top of a military tank for pictures and flashing peace signs. 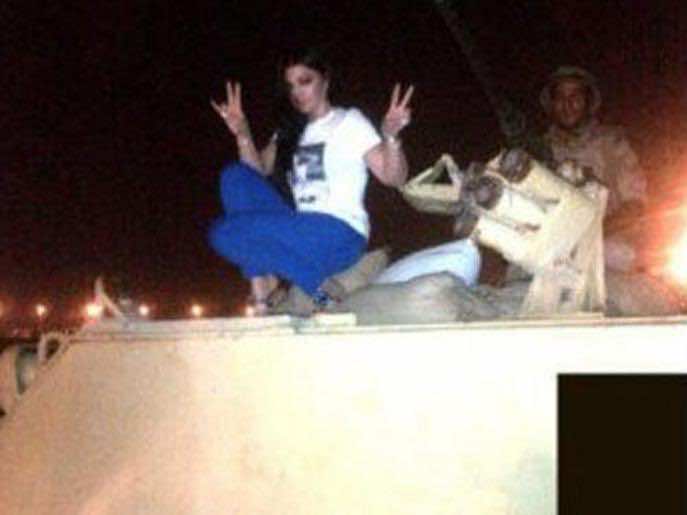 On a recent visit to Egypt, Lebanese diva singer Haifa Wehbe displayed her love and support for the military by posing next to a soldier on top of a military tank for pictures and flashing peace signs.

She tweeted the picture along with “Viva the Egyptian Army, respect! #HaifaInCairo #Egypt.”

She also changed her Twitter profile photo to the Egyptian flag and tweeted: “May God protect Egypt and the Egyptian people and give them victory and stability.”

Pictures of the diva went viral on social media platforms, drawing many reactions.

“If we’ve got Haifa on our side, we win,” said twitter user @IamMariamHamdy. Another tweep, @ZahraHw, said: “I’m sure that the armies of the whole world are envying the Egyptian army right now!”

Many Arab musicians are increasingly pledging support for Egyptian army. The music scene has been greatly affected by the ongoing political and social anxiety.

“The feeling is very different. We are all here investing our support for the betterment of Egypt. In fact the local Egyptian local and satellite TV channels play a lot of patriotic content. Even when we go out to cafes you can hear nationalism through the radio or even through live performances,” said Sarah Tamim, from Cairo.

“Tislam Al Ayadi” (Thanks to the [military] Hands), a song by Mustafa Kamel, Ehab Tawfik, Khaled Ajaj and Suma is a viral radio hit.

“It is common to see popular faces as Egyptians from all walks of life go down to Tahrir Square and other parts of Cairo to express their support for the army. There is this feeling that they are with the common people and represent hope for our country. It is amazing to see influential and powerful people come out and vouch support for the people,” said Mariam Nasser from Alexandria.

In the past few months, Arab celebrities like Munthir Rayahnah, Mona Zaki, Ahmad Helmy, Layla Elwi, Izzat Alayli, Elham Shaheen, Angham, Hani Salama and Amr Waked have been seen among many others on the streets of Egypt pledging their support to the army-backed political transition.

Ahmed Helmy vowed to donate the entire wage of his upcoming film towards the “Daem Maser” (Supporting Egypt) fund that aims to revive the country’s economy. Layla Elwi donated $U.S. 10,000 to the fund.