Taroudant - Tagine is named after the special earthenware pot in which it is cooked. In Moroccan cuisine, tagine is the daily principle lunch meal, eaten with homemade bread. 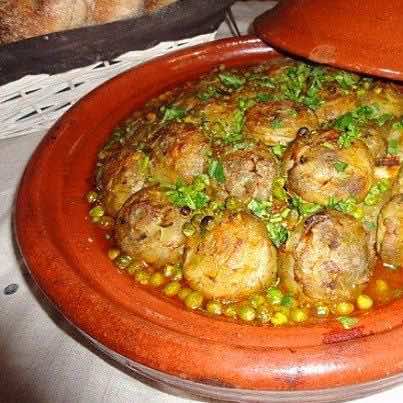 Taroudant – Tagine is named after the special earthenware pot in which it is cooked. In Moroccan cuisine, tagine is the daily principle lunch meal, eaten with homemade bread.

They use various and different vegetables (tajine with vegetables) each time, but meat is the essential ingredient. It may taste and look distinctive depending on the ingredients and the way it is prepared even though the process remains nearly the same.

Meat and vegetables decoratively placed in the Tagine earthenware, and kept simmering slowly on a very low fire, traditionally on embers. Today’s Tagine is meat based and artichoke with peas.

How to prepare tagine in Moroccan cuisine:

1. In this recipe we need just the bottom of the artichoke, so peel off the outer leaves one by one.

2. Remove the interior leaves also until you have just the bottom.

3. Wash the artichokes and soak them in water with lemon juice so as not to turn brown.

4. In a Tagine pot, put some water, garlic, salt and other spices and stir.

5. Marinate the meat in the mixture of spices and garlic.

6. Place the Tagine on the stove and set the fire to a low degree.

7. When it starts cooking, add onions, chopped parsley and coriander then oil. Cover the Tagine and heat for 10 minutes. Stir frequently.

8. Add peas and the bottom of artichoke on the top.

9. Add some  water and let the Tagine cook for an hour and watch it regularly in case it should need some water.