Morocco World News
Home Highlights on Morocco Engaging the Next Generations of Leaders in Morocco: The Youth Bulge and... 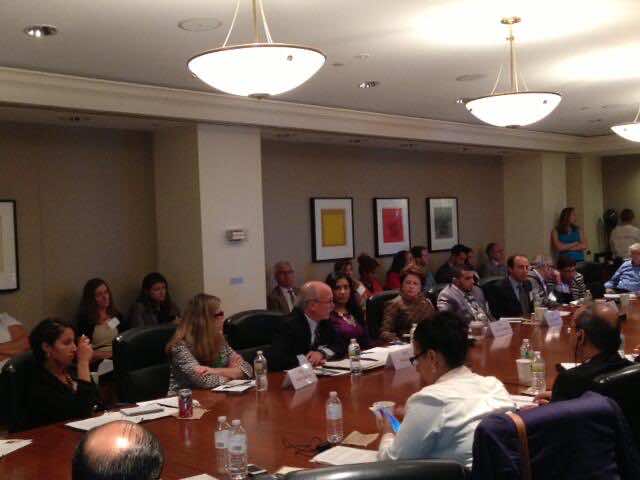 WASHINGTON – Yesterday, civically engaged youth, and young members of parliament from across Morocco, gathered at the Aspen Institute in Washington, D.C. to discuss the best practices for youth engagement, especially in policy making. The participants, part of a USAID funded and RTI implemented Local Governance Program, focused their discussion largely around how to address the growing problem of unemployment among their generation in the Kingdom and worldwide.

This young cohort of change makers who are active participants in youth councils across Morocco, discuss and prioritize youth issues to their elected representatives.  One delegate, Reda Bougeumazi, a member of the local youth council in Safi, said, “His majesty has invited us to participate in a discourse about education in Morocco more than ever before,” referring the King Mohammad VI’s historic speech on August 20th criticizing the educational system for not meeting the demands of the labor market and urging the government to lead reforms.

In 2011, the world watched as Mohamed Bouazizi’s self-immolation in Tunisia sparked the Arab Spring and asked: Will there be a revolution in Morocco? Reda cited the Kingdom’s issue of education as one of the main reasons for the February 20th Movement in Morocco, which called for social justice and political reforms resulting in a new constitution.

Youth did not require the same forms or revolution in Morocco, because, “Youth demands were in conformity with political parties, but the youth movement’s momentum stopped somewhere after the new constitution’s political reforms.  The process should be continued by political institutions and youth should be involved, but they are absent,” Reda said resonating the King’s recent speech.

Yesterday’s discourse was hosted by the Aspen Institute’s North African Partnership for Economic Opportunity (NAPEO).  NAPEO was initiated by former Secretary of State Hilary Rodham Clinton in 2010 and fosters a network dedicated to business-to-business partnerships in the areas of entrepreneurship, education and research, science and technology, and exchange.  NAPEO is one example of a shift in diplomacy towards public-private partnerships, which recognized the shared stake of citizens, business, and government in political stability and economic prosperity.

Zeenat Rahman, Special Advisor on Global Youth Issues for the U.S. State Department, noted, “Over half of the world’s population is under 30 representing the largest generation of young people that has ever existed.”

“There are lots of efforts to empower young leaders and we need to seamlessly connect them all into one story,” she added.

One example, is the International Youth Foundation’s Passport to Success initiative, a life skills program operating in 27 countries, which has recently adapted the program for Hilton’s hospitality industry. This program seamlessly connects the nonprofit world, public sector, and private sector for the ultimate investment–youth development.  William Reese, President and CEO of the International Youth Foundation,  described the outcomes of this investment, “The outcome of a good youth development program on a country level is healthy, civically engaged, income generating adults providing a 50 year return on our investment, which is what we need to build a healthy middle class.”  These concerted efforts supported by young, motivated leaders, strengthen the US-Morocco relationship and pose the Kingdom to be more economically competitive in the African and the international market.