NADOR, Morocco- In a forest overlooking the Spanish enclave of Melilla, Diamani nurses fresh wounds from his latest desperate bid, along with hundreds of other African migrants, to scale the heavily guarded border fence. 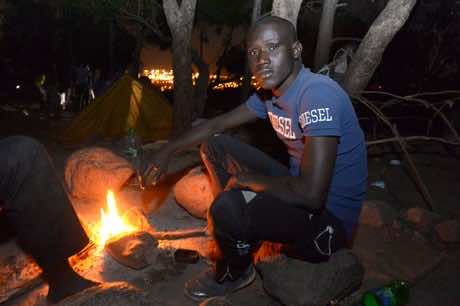 NADOR, Morocco- In a forest overlooking the Spanish enclave of Melilla, Diamani nurses fresh wounds from his latest desperate bid, along with hundreds of other African migrants, to scale the heavily guarded border fence.

He describes being attacked by Moroccan security forces, who he says fired rubber bullets and hurled rocks.

“I managed to get past them, but then cut my leg as I was climbing over the fence,” adds the 27-year-old from Gao in northern Mali, showing a bloody gash on his bandaged left leg.

Sheltering in the Gourougou forest in northern Morocco, hundreds of fortune seekers like him get ready for the night, the lights of Melilla tantalizingly visible below, less than two kilometers (a mile) away.

These are all young men who left their home countries in West Africa, often fleeing turbulent political change, dreaming of a new life in Europe, making money to support the families they left behind.

Some are on crutches, others have arms and heads bandaged, but there is absolutely no question of turning back.

“When I am better I will try again. I’m afraid, but I have to try,” says Diamani.

Saikou, 21, from Timbuktu, arrived in Morocco six months ago after travelling across the Sahara.

“We came here because of the war in Mali. We haven’t come here to rape or to steal, but to search for a better life,” he says.

“When I get there, all my dreams will come true,” he adds with a laugh, gazing down at the twinkling Spanish town.

Around 100 sub-Saharan migrants got through in the dawn raid on Tuesday, out of some 300 who stormed Melilla, which along with Ceuta to the west is the European Union’s only land border with Africa.

They managed to tear down part of the six-meter- (20-foot) high fence around the Spanish-governed territory and threw objects at security forces who tried to repel the assault, Spanish officials said.

The raid was one of at least four this week alone, including on Thursday morning, and caused injuries on both sides, with 20 migrants taken to hospital in the nearby Moroccan town of Nador, rights activists said.

But at least there were no reported fatalities.

Chakib al-Khayari, who runs the local Rif Association for Human Rights (ARDH), says 41 Africans have died trying to enter Ceuta and Melilla since January last year, including 18 so far in 2013.

Many more perish while crossing the Strait of Gibraltar in overcrowded makeshift boats.

Morocco is in a difficult position, clearly stung by the recent media coverage of its heavy-handed approach towards sub-Saharan migrants but keen to cooperate with its European partners on whom it depends for trade.

The migrants say security forces raid their camps daily, beating them, sometimes burning their papers, and deporting them to the border with Algeria.

“We hope there will be less violence, because there really is a lot of violence here. Even at night they come,” says Saikou from Timbuktu.

Last week, Rabat announced a new immigration policy, pledging to review cases according to specific criteria, after King Mohamed VI voiced concerns about the treatment of sub-Saharans in Morocco, where an estimated 20,000 live.

The government said it will shortly establish new procedures and strengthen mechanisms for reviewing the situation of unregistered foreigners “on a case by case basis”.

Some of those camping in the Gourougou forest say they would stay in Morocco if they were treated fairly and allowed to work.

But others doubt that will ever happen, accusing the authorities of racism and discrimination.

“We can’t work here. It’s not even easy to play football,” says Erik, 28, from the Ivory Coast.

“Yes, I heard about the Moroccan government’s new policy, that the king said he will give us our freedom. But I haven’t seen it, and as long as they are attacking us, I don’t believe it,” he adds.