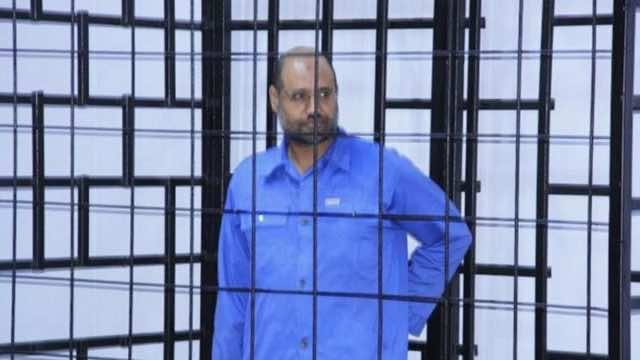 Seif al-Islam Kadhafi stood briefly in the dock before a judge adjourned his case in the western town of Zintan, where he has been in the custody of ex-rebels since his capture after his father’s overthrow and slaying in 2011.

Former rebels in control of the town had refused to hand him over to attend a simultaneous pre-trial hearing before judicial authorities in the capital Tripoli, 180 kilometres (110 miles) away.

“Seif al-Islam Kadhafi appeared before the Zintan court that decided to adjourn the trial until December 12 to allow the attendance of other accused in the case,” the lawyer who was present in court told AFP.

Video footage posted on the Internet showed Seif, 40, standing in the dock behind metal bars and flanked by two masked guards in body armour.

“As for the proper function of judicial proceedings, I want my trial and all other cases to be held in Zintan,” the accused was heard to say.

Prosecutor general Abdulqader Radwan said on Wednesday he had ordered Seif’s transfer to Tripoli to face charges there, the latest of several attempts to negotiate his transfer to the control of the state authorities.

Rights groups Amnesty International and Human Rights Watch have both urged the immediate handover of Seif al-Islam and ex-intelligence chief Abdullah Senussi to the International Criminal Court to face war crimes charges, despite Tripoli’s insistence on trying him first.

Kadhafi’s former heir apparent and others including Senussi are accused of crimes during the revolt two years ago.

An AFP journalist said Senussi and more than 20 former regime officials appeared in court in Tripoli for Thursday’s pre-trial hearing amid heavy security.

The session was held in camera in a judicial and penal complex surrounded by armoured cars and pickup trucks bristling with anti-aircraft guns.

“All of the accused rejected the charges against them en bloc,” one lawyer said on condition of anonymity as he emerged from the proceedings.

He said the trial was adjourned until October 3 after a defence request for more time to study the case.

Security sources said Seif al-Islam was not present because he was unable to be brought to Tripoli for security reasons.

“We have sent a transfer order to the penal authorities concerned to send those persons implicated in Case Number 630, including Seif al-Islam,” the prosecutor general had told reporters in Tripoli on Wednesday.

Deputy prosecutor general Siddiq al-Sur said that all Libyan prisons come under the authority of the justice ministry.

“If the director of any such establishment refuses to obey orders, he will be pursued by the judiciary,” he said.

Asked about the coincidental court appearances, Sur said only that “the prosecutor general’s office was not officially informed about the date of the trial” in Zintan.

The main charges against the suspects in Tripoli include murders committed during the regime’s battle against the revolt that erupted in the eastern city of Benghazi.

Kadhafi was captured and killed by rebels in his hometown of Sirte in October 2011.

Seif al-Islam was seized the following month by a group of former rebels from the mountainous region of Zintan, and has been held there ever since.

The Tripoli trial is seen by some Western observers as an act of defiance against the international court.

A total of 40,000 documents and 4,000 pages of interrogation transcripts will be considered by the court.

The defendants face a string of charges, including the “formation of armed bands to carry out crimes that undermine state security” and “incitation to rape”.

Outside the Tripoli complex on Thursday, several dozen relatives of victims of the 1996 Abu Slim jail massacre allegedly ordered by Senussi staged a protest.

“Death to the assassin!” read placards held by the demonstrators.

Lawyers leaving the compound after the hearing were also subjected to a torrent of abuse.

“You’re all traitors! How could you defend these killers?” demanded one enraged woman demonstrator.