MOSCOW - US Senator John McCain penned an op-ed for a Russian newspaper known for its proximity to Communist Party in which he accused Putin of being a dictator. 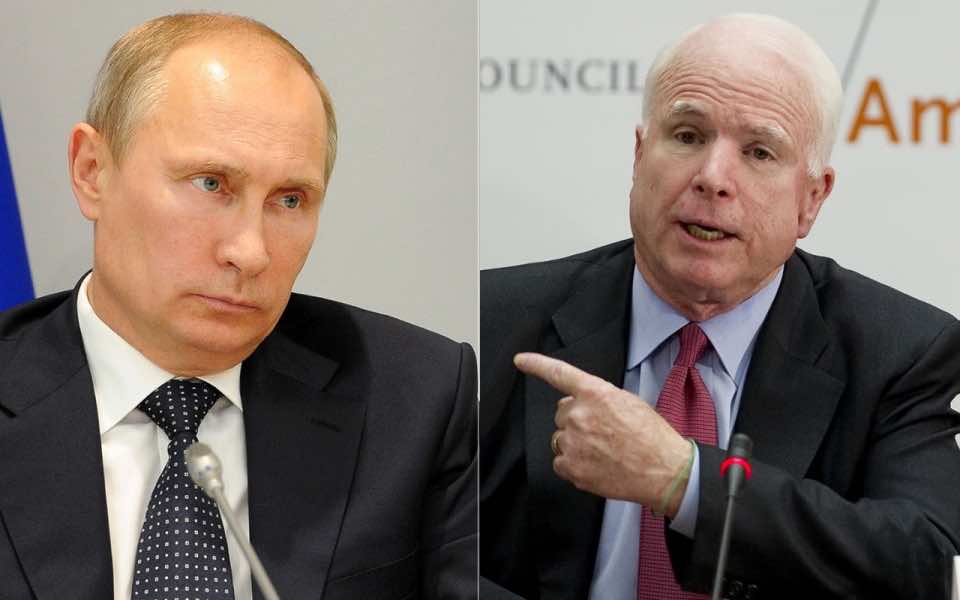 MOSCOW – US Senator John McCain penned an op-ed for a Russian newspaper known for its proximity to Communist Party in which he accused Putin of being a dictator.

In response to Russian President Vladimir Putin’s criticism of the US stance on the Syria crisis, US Senator John McCain penned an op-ed for a Russian newspaper known for being close to Communist Party.

McCain, a firm supporter of the Syrian opposition, directed heavy criticism at Russian President Vladimir Putin in the article published on Thursday.

Denying accusations of being “anti-Russian,” McCain said “I am pro-Russian, more pro-Russian than the regime that misrules you today.”

He accused Putin of being a dictator by writing, “They (Putin and his associates) don’t respect your dignity or accept your authority over them. They punish dissent and imprison opponents. They rig your elections. They control your media.”

US Senator McCain also directed heavy criticism against the Russian stance on the Syria crisis which has claimed over 100,000 lives and displaced six million people. He noted Russian’s blockage of against any resolution condemning the atrocities committed by Bashar Al Assad’s regime.

He stated Putin was destroying Russia’s global reputation instead of enhancing it due to his stance on Syria.

“He has made her [Russia] a friend to tyrants and an enemy to the oppressed, and untrusted by nations that seek to build a safer, more peaceful and prosperous world,” McCain said.

Russian President Putin had written an article for the New York Times in which he warned the US against attacking Syria without the UN Security Council’s authorization. Putin said in the opinion article that “The potential strike by the United States against Syria, despite strong opposition from many countries and major political and religious leaders, including the Pope, will result in more innocent victims and escalation, potentially spreading the conflict far beyond Syria’s borders.”

The August 21 chemical attack mounted by the Syrian army outraged the international community with the US threatening to take military action against the Syrian regime.

However, a Russian proposal to place the Syrian chemical stockpile under international supervision saved the Assad regime from an imminent US airstrike. The Barack Obama administration still insists the US can attack the Syrian regime if Assad fails to implement the chemical deal.