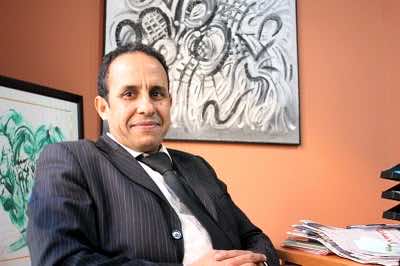 By
Jamal Saidi
-
Jamal Saidi is an English teacher.
Sep 19, 2013
Spread the love

The public persecutor in the capital city of Rabat ordered the arrest of the journalist for allegedly broadcasting a  video of Al-Qaeda in the Islamic Maghreb [AQIM] that contains “a clear invitation  and direct incitement to commit  terrorist acts in the kingdom.”

According to the Moroccan website Goud, over 300 people protested yesterday  in front of the judicial police headquarters in Casablanca to condemn the arrest. Journalists, artists, politicians, and human rights activists were among the protestors who demanded Anouzla’s immediate release.

Activists have also called for a protest this evening in front of the Ministry of Justice in support of Ali Anouzla.

Hassan Ben Najeh, a member of Al Adl wal Ihsan [Justice and Charity’s politburo], also condemned the arrest and considered it to be “a bid to silence the journalist and restrict his right to freedom of speech.”

Another support of Anouzla’s,Mohamed Ezohari, president of the Moroccan League for Human Rights, wrote a letter to Lakome.com to show his solidarity with its chief editor. He stressed that holding of Ali Anouzla uncovers the misuse of the judiciary to settle accounts with dissidents. He went on to explain, “many honorable activists acknowledge Mr. Anouzla’s professionalism and courage in dealing with national issues and defending citizens’ interests. His writings disturb opponents of democracy and enemies of human rights as well as lobbies of financial and political corruption,” he added.

Philip Luther, Middle East and North Africa Programme Director at Amnesty International, voiced his concerns for Anouzla’s current situation. He said, “we fear Ali Anouzla is being punished for Lakome’s editorial independence and criticism of government policies, in what signals a worrying setback for freedom of expression in Morocco. He is a prisoner of conscience and should be released immediately and unconditionally.”

Meanwhile, very few political parties have issued statements in response to the detention. Istiqlal [Independence Party] denounced the writings of the detained journalist accusing him of inciting  against territorial integrity of the kingdom and using  his  media outlet as propaganda against Morocco and its vital interests.”

Istiqlal emphasized that “adopting terrorist discourse that carries an explicit threat to Moroccan citizens is punishable by law.” The journalist deliberately aired the aforementioned video via different ways after its withdrawal by Youtube,” the same source noted.

The statement went on to say, “such behavior brings to the surface hate that Ali Anouzla holds for Morocco, a matter which reveals he is in service  of  foreign parties that are hostile to Morocco.”

The party also expressed its support for all “legal actions undertaken by the security and judicial authorities in the Kingdom.” The Popular Movement Party depicted the alleged broadcasting of the video as “irresponsible practice” and an “adoption of terrorist speech” that serves “a terrorist agenda”.

On the other hand, the National Union of Moroccan Press called for enacting the Press Law in suing Lakome’s editor, while warning of  “posing restrictions on freedom of press and journalism.” The Union also highlighted that it follows the journalist’s case out of belief in the principle of defending freedom of press, but it also condemns incitement to violence and terrorism and the call to act criminal acts via media.

It is worth noting that  Moroccan authorities have arrested hundreds of Salafists following the terrorist attack that hit the kingdom on May 16,2003. Since then,  authorities have  announced dismantling of various “terrorist” cells accused of seeking to “destabilize  security of  the country,” some of which are  linked to AQIM.