CAIRO - Security forces on Friday hunted down militants in a village near Cairo amid a lull in clashes with gunmen, as Egyptian state media praised the "liberation" of Islamist bastion Kerdassah. 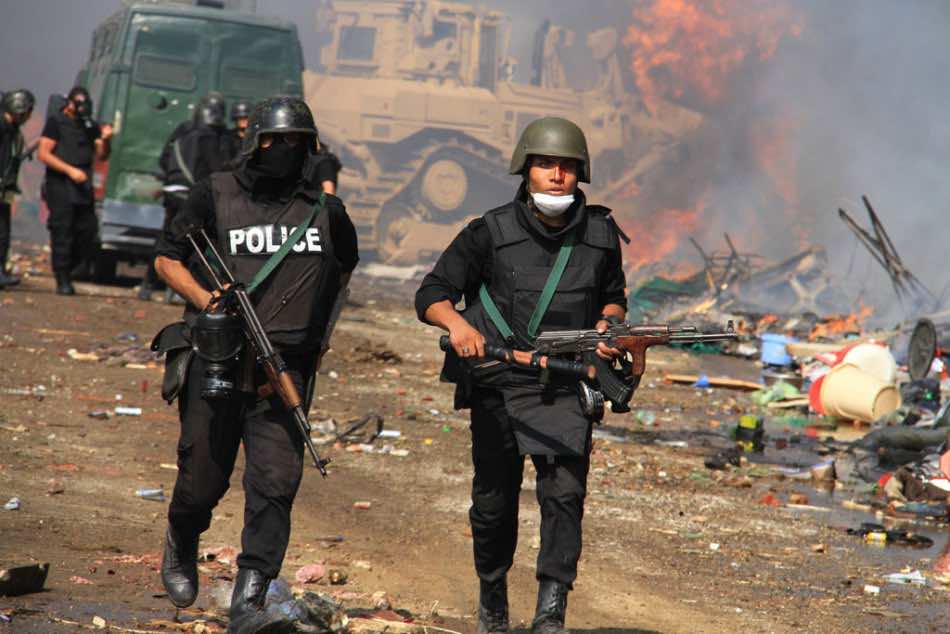 CAIRO – Security forces on Friday hunted down militants in a village near Cairo amid a lull in clashes with gunmen, as Egyptian state media praised the “liberation” of Islamist bastion Kerdassah.

A police general was shot dead when security forces stormed the village near the Giza pyramids on Thursday in the latest crackdown on Islamist supporters of ousted president Mohamed Morsi.

The funeral of Giza deputy security chief Nabil Farrag was due to take place after Friday prayers — at the same time as fresh protests called by Morsi’s Muslim Brotherhood group.

State television said the fighting in Kerdassah had now eased and that troops were carrying out house-to-house searches for Islamists militants on the run.

State television said they were hunting for those responsible for an August “massacre” of 11 policemen in Kerdassah.

The interior ministry said 68 wanted men have now been arrested along with their weapons in the operation launched after dawn on Thursday.

The 11 policemen were found killed on August 14, just hours after security forces cracked down on two camps of Morsi supporters in the capital.

Egyptian media on Friday poured praise on the Kerdassah operation.

“Kerdassah liberated of terrorism,” said a front-page headline in state newspaper Al-Gomhuriya, while independent daily Al-Shoruk said: “The state is back, terrorism fades.”

However Brotherhood newspaper Al-Hurriya Wal Adala blasted security operations in Kerdassah and Delga earlier in the week as “a war on Egyptians”.

Security forces on Monday raided the central town of Delga in Minya province, which was held by hardline Islamists for more than a month.

Egypt has been gripped by security-related problems since the 2011 uprising that toppled long-time president Hosni Mubarak, but the unrest surged after the military’s ouster of Morsi on July 3.

The army has also been engaged in a campaign in the Sinai peninsula, pouring in troops and armour to crush militant attacks, which increased after Morsi’s ouster.

The Islamist president’s removal came after millions took to the streets to demand his overthrow following a year-long turbulent rule that deeply polarised the people.