ANKARA- Russian Defense Minister Sergey Shoigu said that Russia had no plans to destroy the chemical stocks of Syria in Russia, according to DEBKAfile, an Israeli website known to be close to Israeli espionage channels. 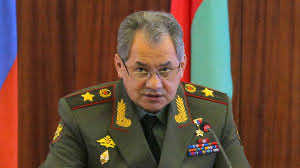 ANKARA- Russian Defense Minister Sergey Shoigu said that Russia had no plans to destroy the chemical stocks of Syria in Russia, according to DEBKAfile, an Israeli website known to be close to Israeli espionage channels.

An analysis appeared on DEBKAfile website suggests that Russian leaders gave a cold shoulder to the Kerry-Lavrov understanding for Syria’s chemical disarmament – less than a week after it was unveiled in Geneva last Saturday.

It says that the only two countries with the capability of destructing Syrian chemical weapons are Russia and the US and predicts that none of the two countries will be acting hastily on such a delicate matter. The analysis goes on to say that the import of chemical ammunition was banned under US law and Assad’s chemical arsenal could not be brought into US soil for destruction.

Reminding the Fox TV interview with Syrian President Bashar Assad, the website says Assad knew how hard the destruction of his chemical weapons and mocked the decision as saying: “It [the destruction of poison chemicals] is very detrimental to the environment. If the American administration is ready to pay this money and take the responsibility of bringing toxic materials to the United States, why don’t they do it?”

The analysis also quotes Russian President Vladimir Putin as commenting on the issue that he could not be 100 percent certain that the plan for the destruction of Syria’s chemical weapons would succeed. “

The analysis further says that Syrian president Assad drew a distinction between his operational chemical arsenal and the stockpiles of those weapons and he is apparently willing to let the first category go, but determined to keep the stocks. It also says some Western intelligence expert have concluded that Assad’s manner was confident verging on cocky, showing he felt certain that he would not be deprived of his chemical capabilities.

The Israeli website commented further on the deal as follows:

“As the Kerry-Lavrov deal falls apart, it turns out to have been less an agreement and more a loose compilation of limited understandings on the Syrian chemical question, which left unresolved sharp, fundamental disagreements between Washington on Moscow on how it should be handled, particularly at the UN Security Council.”

The analysis concludes as it says that US President Barack Obama sold the Kerry-Lavrov deal to his people and to the whole world as a victorious breakthrough in Syrian impasse and as a path for a similar deal on Iran’s nuclear weapons issue too.