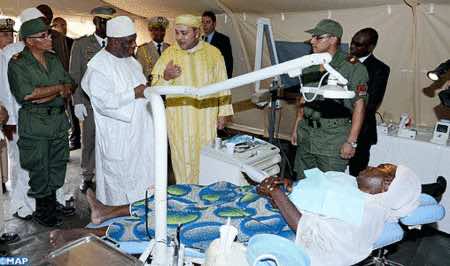 Upon His arrival, King Mohammed VI was welcomed by Lieutenant General Abdelaziz Bennani, Inspector General of the Royal Armed Forces (FAR), Commander of the southern zone, brigadier general Ali Abrouq, Inspector of the health service at the FAR, and Colonel Abdelouahed Baite, head doctor of the Moroccan medical and surgical hospital.

The Sovereign was also welcomed by Malian Minister of Public Health and Ousmane Koné.

He was given details about equipment and services offered by the field hospital for the benefit of Malian citizens.

Accompanied by the President of Mali, King Mohammed VI visited the different departments of the hospital, before posing for a souvenir photo with the staff of the hospital.

The hospital, set up near the Modibo Keita Stadium at the center of the capital of Mali, has received since its opening hundreds of people who came for specialized healthcare in neuropsychiatry, cardiology, pulmonology, dermatology, plastic surgery, pediatrics, and gynecology.

The facility includes advanced medical equipment such as a laboratory, an operating ward with an intensive care unit, a ward for general anesthesia and an emergency room. Patients are provided with medicines according to their pathology.

Supervised by a staff of 106 people, including specialized doctors, nurses and a team of coaching and support, the hospital has a capacity of forty beds.

The initiative of King Mohammed VI to set up a field hospital in Mali is a lofty humanitarian gesture that reflects the personal commitment of the Sovereign regarding human causes and his continuing effort to give concrete substance to the values of solidarity, mutual assistance and cooperation to heal the wounds of the brotherly people of Mali.