CAIRO – At least four people were injured in clashes in eastern Alexandria's Seyouf district, where the two sides hurled stones and fired shotguns loaded with birdshot at one another. 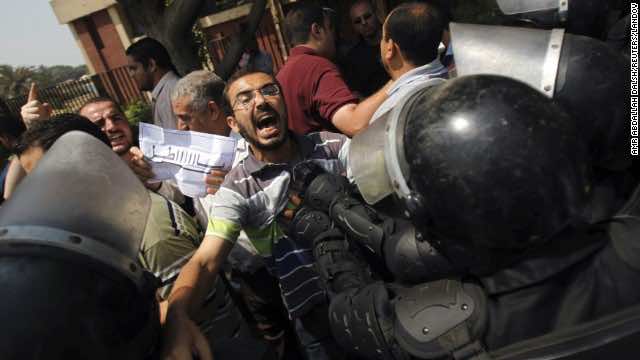 CAIRO – At least four people were injured in clashes in eastern Alexandria’s Seyouf district, where the two sides hurled stones and fired shotguns loaded with birdshot at one another.

At least 35 people were injured on Friday in fresh clashes between supporters and opponents of ousted President Mohamed Morsi in five provinces across Egypt.

At least four people were injured in clashes in eastern Alexandria’s Seyouf district, where the two sides hurled stones and fired shotguns loaded with birdshot at one another.

Seven others were injured tens of kilometers away in the Sidi Beshr district, a source with the local ambulance service said.

According to eyewitnesses, at least 12 Morsi supporters were arrested by authorities.

In the canal city of Suez, meanwhile, nine people were injured in similar violence as Morsi supporters and opponents engaged in clashes with stones and sticks in the Mothalath district, medical sources said.

The violence spilled over into three neighboring districts, where roads were blocked with burning tires and cars were smashed.

In the Upper Egyptian city of Assiut, a bastion of support for the ousted president, police forces fired into the air to disperse a pro-Morsi protest in the west of the city.

Street fighting ensued, after which police and army reinforcements arrived at the scene.

Ten more people were injured in Giza’s Dokki district when unidentified gunmen opened fire at a pro-Morsi march en route to the nearby Mustafa Mahmoud Square.

The violence comes as Morsi backers staged fresh rallies on Friday to denounce what they describe as the “military coup” against Egypt’s first democratically elected head of state.

Pro-democracy demonstrators have been holding daily mass rallies across the country for the last 85 days to denounce Morsi’s July 3 ouster by Egypt’s powerful military establishment.

Friday’s rallies were called for by the pro-Morsi National Alliance for the Defense of Legitimacy, under the banner “The young are the pillars of the revolution.”

“This week’s rallies coincide with the return of students to schools and universities,” the alliance said in a statement, a copy of which was obtained by Anadolu Agency.

“We call on them to join the peaceful protests to end the coup,” the alliance added.

The new academic year will kick off in Egypt on Saturday.

Morsi was ousted by the military more than two months ago after massive, well-coordinated protests against his presidency.