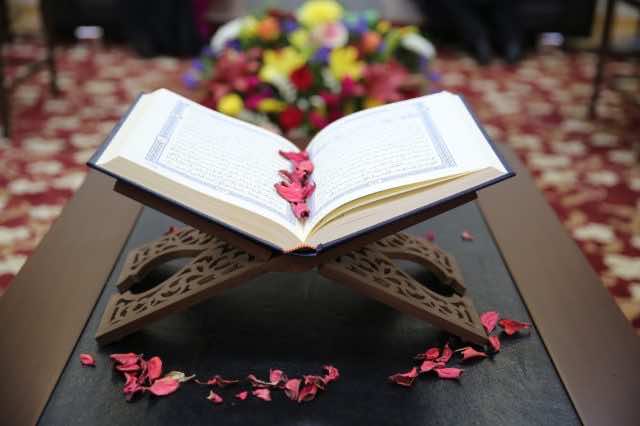 The three promising singers were greeted back home as heroes by a Moroccan audience so proud of their young talents. For them, it was like a national victory in contests where participants from all Arab countries took part and where fans had to massively vote if they wanted their favorite artists to win the shows.

In a country where there’s almost no music industry, no star system and so many talents, it’s understandable why Moroccans were so enthusiastic about their countrymen’s performances. It’s also understandable in a time where the entertainment industry is booming in the Middle East, attracting more audiences and young talents dreaming of stardom.

In the meantime, there were other Moroccan young men and women doing very well on another level of competition but received less interest from Moroccan authorities, national media and audiences than the young singers did.

Hasna Khoulali, Hajar Boussaq and Ahmed Al Khaldi are three young Moroccan Quran reciters who won (last year and this year) international Quran competitions in Malaysia and Indonesia, but their achievement wasn’t met with the same enthusiasm. Nobody showed up to greet them at the airport except their families or friends, and state televisions didn’t pay them the same honor as their musician counterparts.

Such a situation is very problematic.  Before I proceed in explaining why, I want to point out that by no means am I belittling the importance of arts and music in society or denouncing people’s right to care about and watch or listen to whoever they want.

But let’s face it. You can’t put the Quran and music on the same level. Religion is the main component of Moroccans’ identity, and I’m sure if you ask most people in this country they’d tell you they are Muslims first, before they’d say they are Moroccans or Arabs or Amazigh.

The quran is the word of Allah and the key for Muslims to understand and practice well their religion. It’s also a code of behavior to follow in their daily life and a source of peace and tranquility for their troubled souls.

Music, however, is entertainment. And the fact that now it’s more and more an industry makes it rather a product for quick consumption than a source of inspiration where artistic ideas are the priority instead of commercial inclinations.

Show business made it even worse. It somehow imposes its tyranny by modeling people’s choices. Stars are created and “packaged” in a certain way to be properly “sold” to an increasingly eager audience. Music TV shows are almost the same with some differences in some minor details. Still, nothing seems to satiate people’s appetite for watching and following all the details of their favorite artists’ lives.

Entertainment business in the Arab world, as elsewhere, is creating “idols” venerated by millions of aficionados. Moroccan fans are no different. So it’s obviously normal that they’d be delighted to see rising Moroccan singers join the long list of Arab celebrities.

Of course, Moroccan state televisions didn’t “make” those future stars because they lack the means to. But they’re contributing to spreading the illusion that music TV shows are creating among young Moroccans and Arabs about the shortest ways to a glamorous life.

The coverage they reserved for those singers and the lesser tribute they paid to the young Quran reciters who also honored the Moroccan flag internationally, certainly even in a grander manner, raise questions of the only model they’re promoting for younger generations.

This is also the impression Moroccan authorities are giving. During King Mohamed VI’s last celebration of the day marking his enthronement, the monarch decorated many singers and musical bands that barely have produced a few albums. It also looks very early to speak of how significant was the contribution they made to Moroccan music. Some are even controversial because their songs’ lyrics are not the kind of words to set examples for teenagers.

None of the many young Moroccan Quran reciters who won first prizes abroad were included among the decorated, even though they won in international competitions in several countries such as Tunisia, Bahrain, Kuwait, Indonesia, Malaysia, Lebanon and Algeria.

As a consequence, these young men and women are not promoted for the youth as good examples dedicating their time and energy to serve the word of God and honoring their country internationally among Muslims nations.

However, young Moroccan singers who became famous after taking part in Arabic TV music shows are constantly being advertised. Most of them, however, end up settling in the Middle East where there can launch their career.

They’d appear in Arabic TV shows speaking and singing Egyptian, Lebanese and Khaliji songs and promoting those dialects instead of their own. At the end, their contribution to spreading Moroccan music and culture in the region is almost none.

Quran reciters, on the other hand, are helping perpetuate the country’s traditions in memorizing and reciting the holy book. Some of them are young girls who are dispelling misconceptions about Moroccan women whose image was tarnished because of the behavior of some Moroccan females in the Gulf, something which was highly instrumentalized in Middle Eastern drama and cinema.

With all that said, Moroccan authorities are invited to rethink what they want to show the world most: How Moroccans sing or how they recite Quran?