NAIROBI — Eighteen-year-old Umar Ahmed was enjoying a relaxed Saturday trip to a Nairobi shopping mall when gunmen stormed in and all hell broke lose. 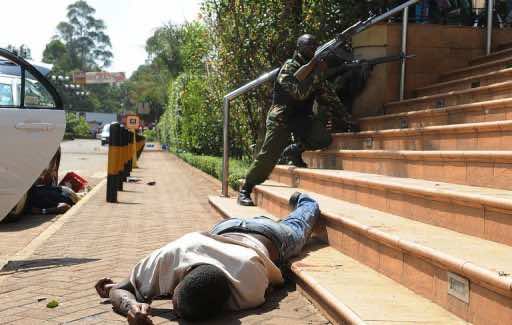 NAIROBI — Eighteen-year-old Umar Ahmed was enjoying a relaxed Saturday trip to a Nairobi shopping mall when gunmen stormed in and all hell broke lose.

“I was at Westgate Mall rooftop at the parking, and all of sudden I heard screams and gunshots all over the place,” Ahmed recounted.

“I got scared. I tried to run down the stairs and saw someone running towards the top, I ran back and hid behind one of the cars,” he said from his hospital bed at MP Shah Hospital, where he is nursing burns to his hands and chest.

Ahmed said he found himself on the ground, playing dead. He said he could see one of the gunmen approach and look at him.

“Thankfully he turned back,” he said. “After a while, the police came and we were able to be evacuated.”

According to the hospital manager Manoj Shah, more than 100 casualties were brought to his facility alone following the attack on the Westgate mall, which was claimed by Somalia’s Al Qaeda-inspired Shebab rebels.

“Our bed capacity is full, we cannot accommodate any other person, we need more supplies and we are appealing to our suppliers and well wishers to come in and help,” Shah said.

He said that 11 people have been brought in already dead, and that an appeal for blood donors had been made.

The Red Cross confirmed 30 people had died in the attack.

Helicopters buzzed over the shopping complex as the operation to secure the mall stretched into the night, the large centre empty but for elite police units and troops, the attackers and any remaining shoppers.

Earlier, as police went shop to shop evacuating terrified people, a police source confirmed that the attackers were holding at least seven hostages.

As darkness fell over Nairobi, their fate was unclear.

Another survivor of the attack, who only gave his name as Jay, said he witnessed the gunmen round up shoppers, ask them questions — possibly to find out if they were Muslims — and then execute them.

“They spoke something that seemed like Arabic or Somali,” said a the man. “I saw people being executed after being asked to say something.”

Kenneth Kerich, who was shopping when the attack happened, described scenes of panic.

“I suddenly heard gunshots and saw everyone running around so we lied down. I saw two people who were lying down and bleeding, I think they were hit by bullets,” he told an AFP reporter after he managed to escape the carnage.

“Initially we thought it is police fighting thugs. But we could not leave until when officers walked in, shot in the air and told us to get out.”

Another eyewitness said he saw the body of a child being wheeled out of the mall.

“The gunmen tried to fire at my head but missed. At least 50 people were shot. There are definitely many casualties,” mall employee Sudjar Singh told AFP.