DAMASCUS- Russia on Sunday accused the United States of trying to blackmail it into a tough UN resolution on Syria's chemical weapons, as a mortar round hit Moscow's embassy in Damascus. 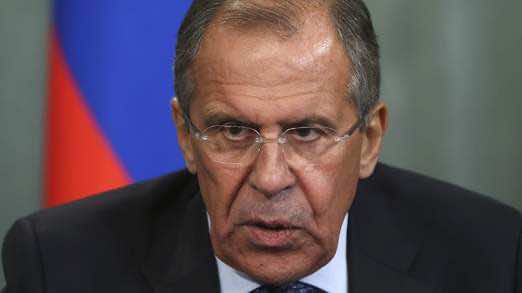 DAMASCUS- Russia on Sunday accused the United States of trying to blackmail it into a tough UN resolution on Syria’s chemical weapons, as a mortar round hit Moscow’s embassy in Damascus.

The comments came as the world’s chemical weapons watchdog examined an inventory of Syria’s arsenal, submitted to the body under a deal that headed off US military action against Damascus.

The agreement is to be enshrined in a UN resolution, which has caused disagreement among the Security Council’s five permanent members.

The United States, Britain and France want a tough resolution that could include sanctions or use of force under the UN Charter’s Chapter VII if Syria fails to implement the deal.

But Russia opposes such language and Foreign Minister Sergei Lavrov on Sunday accused Washington of trying to “blackmail” Moscow.

“Our American partners are beginning to blackmail us: if Russia won’t support a resolution under Chapter VII in the UN Security Council, then we will stop the work in the Organisation for Prohibition of Chemical Weapons,” he told Channel One, Russian agencies said.

The Hague-based OPCW is overseeing the inventory and destruction of Syria’s chemical weapons under the agreement.

“Our partners are now blinded by their ideological goal of regime change (in Syria)” Lavrov said.

“All they talk about is that (President) Bashar al-Assad must leave.

“They are only interested in proving their own superiority. Not in the goal that is guiding us, to solve the problem of chemical weapons in Syria,” he added.

Lavrov’s comments came as a mortar round slammed into the compound of the Russian embassy in Damascus, the first such hit against the site.

The attack was confirmed by an embassy source speaking to Syrian state news agency SANA, as well as the Syrian Observatory for Human Rights watchdog.

The OPCW said Saturday is had received a complete inventory from Syria of its chemical arsenal and was scrutinising the data.

Just hours later CNN quoted a senior US administration official as saying that US officials were surprised and encouraged by the volume of information provided by Damascus.

“The official said the declaration was more complete than what the officials had expected the Syrians to put forth,” CNN reported.

A tentative Saturday deadline had been set for the full accounting of Syria’s arsenal under the plan which calls for its chemical weapons to be destroyed by mid-2014.

A Syrian rebel tries on a gas mask in the northwestern province of Idlib, on July 18, 2013. Russia has accused the United States of trying to blackmail it into a tough UN resolution on Syria’s chemical weapons, as a mortar round hit Moscow’s embassy in Damascus.

There are hopes that the deal could pave the way for peace talks to end the 30-month conflict which has killed more than 110,000 people and forced two million more to flee abroad.

But the plan has been greeted with scepticism by the Syrian opposition.

The OPCW, which enforces the Chemical Weapons Convention that Syria has applied to join, postponed a meeting of its Executive Council due Sunday to discuss the practicalities of disposing of Syria’s chemical weapons.

The deal was worked out after Washington threatened military action in response to an August 21 chemical weapons attack outside Damascus.

Most Western governments and the Syrian opposition accuse forces loyal to Assad of unleashing the chemical weapons that killed hundreds in suburbs of the capital.

A Syrian walks along the cobbled street in Damascus, on September 21, 2013. Russia has accused the United States of trying to blackmail it into a tough UN resolution on Syria’s chemical weapons, as a mortar round hit Moscow’s embassy in Damascus.

A UN report released last Monday said that sarin gas was used in the Syria attacks but did not apportion blame. Assad’s government and the rebels fighting to oust him have accused each other of being responsible.

The Syrian conflict is expected to take centre stage at UN headquarters when the annual General Assembly opens on Tuesday.

President Hassan Rowhani of Iran, a leading Syrian ally, is among the keynote speakers and has offered to mediate between the opposition and the Damascus government.

But the opposition Syrian National Coalition has dismissed the offer as “not serious”.

On Sunday Rowhani warned the West that it will “regret” any military intervention in Syria, and called for dialogue to stop the war.

Turkey, meanwhile, said Sunday that it would not “tolerate” Al-Qaeda-affiliated groups emerging in the Syrian conflict, after clashes between the radical groups and other rebels this week.

“We will not allow any formation beyond our borders that would threaten Turkey and the entire region,” Turkish President Abdullah Gul was quoted as saying by the Milliyet newspaper on Sunday.

“We can never tolerate this.”

Al-Qaeda affiliate the Islamic State of Iraq and the Levant clashed this week with another rebel brigade in the town of Azaz, close to the Turkish border.