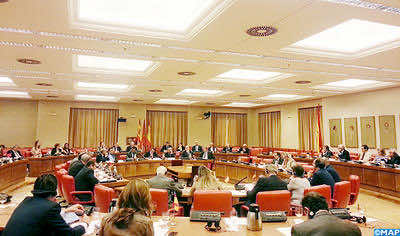 The President of Spanish Senate Pio Garcia Escudero, and the presidents of the Moroccan parliamentary groups and members of both friendship groups are participating in this two-day forum opened by the President of the Congress of Deputies (lower house of parliament) Jesus Posada and Karim Ghellab.

The Spanish-Moroccan Parliamentary Forum aims to consolidate the relations of cooperation and coordination between the two parliamentary institutions on various issues of common interest.

The meeting will focus on the economy, migration and mobility, cultural, political and security and parliamentary relations

The presidents of the parliamentary groups of the two countries as well as members of the Spanish government are expected to intervene in the forum including Interior Minister Jorge Fernandez Diaz, Secretary of State for Trade, Jaime Garcia-Legaz, and Marina del Corral Téllez, Secretary General for Immigration and Migration.

On the sidelines of this forum, the presidents of both chambers of the Moroccan parliament will participate in a conference under the theme “Morocco in the 21st century, a changing society”.